How does one imagine a meeting of world leaders? A long table with seatings along the side and a few people standing by the door. Perhaps one cracks a witty limerick but they all get down to business soon. But, that’s too mainstream and US President Donald Trump does not do mainstream. Reason, grammar, a basic level of human understanding, it just doesn’t fly with POTUS. So why should their world affairs be any different?

On his first Presidential trip abroad, Donald Trump visited Saudi Arabia for the inauguration of a new Global Centre for Combating Extremist Ideology. Amid all the formalities, there was a moment where Trump, Saudi Arabia’s King Salman, and Egyptian President Abdel Fattah al-Sissi all had their hands placed one over another on a globe as the others watched the ceremonial action, whatever it may represent.

Nothing out of the ordinary? Let’s rethink that. Three rich, grown men at a formal gathering are touching a glowing orb in the darkness of a vast hall while the bystanders watch. Getting creepy yet? 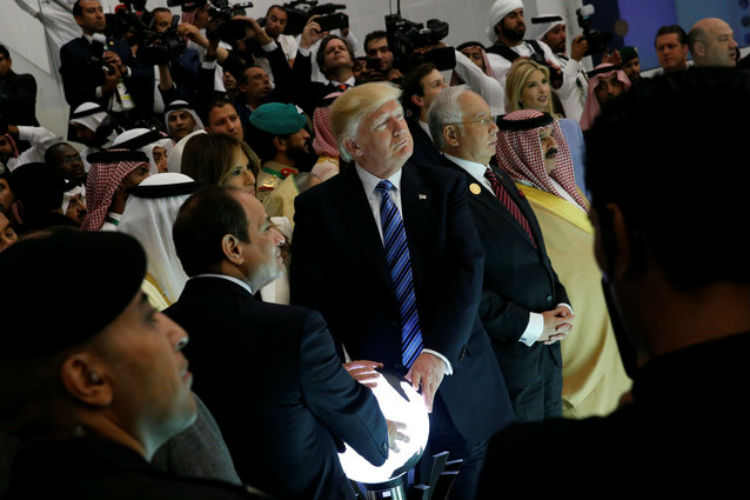 Well, you might think that it looks like nothing but, Twitter did not waste a second to make it into something. While some imagined the orb to be the Palantir from J.R.R. Tolkien’s The Lord of the Rings, others saw the Orb of Peace from The Phantom Menace. Here are some hilarious tweets that are assured to get you cracked up:

I PHOTOSHOPPED SARUMAN INTO TRUMP’S ORB PICTURE AND IT’S NOT EVEN WEIRD pic.twitter.com/cVJFGP5NPG

Seriously though can someone explain why Trump is ominously holding a glowing orb with some Saudis.

when that dank orb hits pic.twitter.com/B559plLEnm

“i can feel the energy from this orb it is really amazi…wait now i feel so tired what happen” pic.twitter.com/JHlZlfpzAi

“the three of you have been chosen to find the halfing and bring him to m….whoa wat is up with your tiny hands” pic.twitter.com/CnndYpJ8WE

@cd_hooks it’s totally the Orb of Peace from the end of The Phantom Menace pic.twitter.com/KuBEIfKWdY

just some billionaires gathering in the dark and holding a glowing orb. probably fine

@fart “O wise and ancient Orb, turn these hands of a child into those of a man.” pic.twitter.com/Xa9jM1MKRL

seriously though… this “Harry Potter and the Order of the Phoenix” reboot is terrible pic.twitter.com/YspKvCm4g4

It was unfair to show the orb photo cropped. Here it is with full context and it is not weirder at all. pic.twitter.com/JZ9HXvC0Gf

You vs. the Orb she told you not to worry about. pic.twitter.com/74hGHDNtxk