A 42-year-old Injambakkam resident in Chennai, Selvi, gave shelter to a cockroach in her nose last Tuesday. After prodding dozen of hands and visit to four hospitals, both of the lives were saved by the doctors.

Selvi woken up on Tuesday night with an antsy sensation in the nasal cavity. At first, she thought that she was suffering from normal cold but the obstacle began to jiggle and she was taken to a private hospital.

Doctors thought it was a nasal growth. They tried to cure it by pumping it out with water, but failed. Later the doctors detected “a movable host” and recommended a scan.

Selvi, who was struggling with breathing was referred to  Stanley Medical  Hospital on Wednesday morning, found that the ‘obstacle’ body has a pair of antennae and legs!

“It was a full grown cockroach,” said Dr M N Shankar, head of the department, after using an endoscope to examine Salvi’s  nasal cavity . The roach was found in between the eyes, close to the brain. 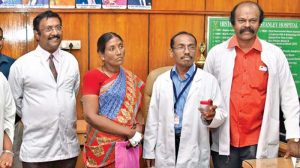 When a suction apparatus was used, the insect clung to the tissues. “We had to use a combination of suction and forceps to finally pull it out,” said Dr  S Muthuchitra, part of the rescue team. The process went for 45 minutes!

The cockroach was enjoying its new shelter and was alive. It didn’t seem to want to come out as said by Dr Shankar.

The department has successfully removed beads, a button cell, leech, and chalk piece from nasal cavities in the past. But not a cockroach, especially not one that is this large. It is well said that doctors are equal to god and in this case even they proved themselves by saving both of the lives!