The debate around hijab (a veil worn by Muslim women) refuses to die even as the world is talking about right of the women to choose whatever they want. An American company, American Eagle has introduced a new product, denim hijabs and has invited more criticism than praises for it. The company has chosen Somali-American model Halima Aden, who made it to the cover of Vogue Arabia to promote its latest product but the internet  seems pretty divided on the entire issue, while some are completely in love with American Eagle’s new product, some have brutally criticised the company for promoting a ‘repressive ideology’.

After posting the advertisement on their Twitter and Instagram handle, American Eagle majorly received criticism for ‘supporting oppression’ than applause. And mainly because, it is considered that Muslim women are supposed to wear Hijab in presence of the male members of the family and in public spaces as it is haraam (forbidden) to leave skin exposed. Although there is a constant debate about women’s freedom of choice and nowadays, hijab is also being treated as a fashion accessory by many Muslim women but debate shows no signs of dying.

Not only American Eagle seems to be losing many of its customers, some people have even asked  it to stop glorifying and promoting such an ‘regressive, misogynistic’ thinking by making it sound as something fancy. On the other hand, may be only a few but some are even praising the company’s move and apparently, the first batch of denim hijabs seems to be sold out already.

She caught our attention at 2016’s Miss Minnesota USA, where she competed in a burkini & hijab. Meet @Kinglimaa: https://t.co/UIUbKwAZyn pic.twitter.com/n2xjJnm7kn

I will not shop at a place that supports a repressive, barbaric, misogynistic ideology. Keep religion out of our f’in stores.

so American Eagle is cool with the oppression of women now? Won’t be shopping there anymore. #Boycott

Mandatory hijab = oppression. Mandatory only for women = subjugation based on gender. Self-determination is priceless. #WhiteWednesdays. pic.twitter.com/MoIMlBMbsz

I am sick by this, American Eagle making money off of the suppression of women. How could you? I’ll never shop at your store again.

You should change your name from American Eagle to something you actually represent. Oppression, perhaps.

Wow, the denim hijab is sold out! Would love to hear when there are more in stock! Thanks for standing with unity and love!

I love this! Keep up the great work American Eagle. 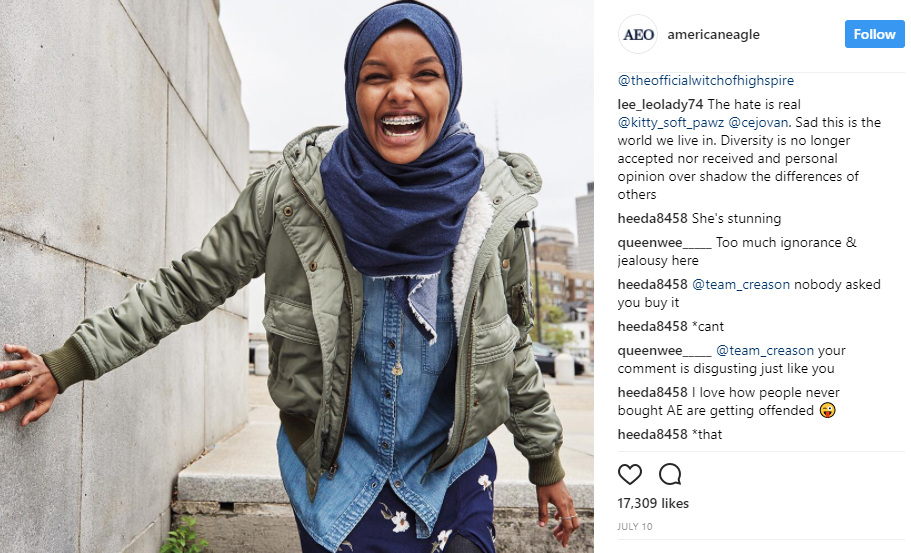 Do let us know in the comments section what do you think about the whole issue?