Over three years ago, a cold-blooded murder took place in an ATM in Bangalore that shook the country.

The man behind the horrific attack in a Bengaluru ATM has finally been arrested in Chitoor district of Andhra Pradesh by the police team. The man is a 43-year-old named Madhukar Reddy. He had already been sentenced to life imprisonment for a murder after he had escaped from a hospital in Kadappa in 2011. He inhumanly attacked the women in the Bengaluru ATM two years later.

Reddy was tracked by a special police team that tracks runaway criminals. He had escaped during interrogation after he confessed to the brutal assault on the bank official inside the ATM kiosk on November 19, 2013 and he also confessed that he murdered two women in Andhra Pradesh and a sex worker in Hyderabad. 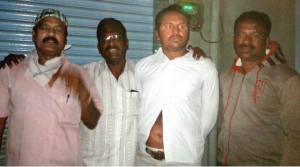 The Bengaluru attack had triggered widespread public reaction as the woman, who was an employee of Corporation Bank, was left paralyzed on her right side. After attacking the woman in the ATM, Reddy had worked as a painter at some places in Kerala and in Guntur in Andhra Pradesh as reported by the police and later he returned to Chitoor for treatment.

The CCTV recording of the ATM showed him continuously attacking the helpless woman with a machete. It also raised the issue of safety at ATMs which made the government to take prompt actions against the banks having unguarded booths.

The woman’s family is happy about the arrest after three years as they had left all hope of getting any justice. “We thought he may never be arrested. We came to know about his arrest through the media and we are happy about it.” Uday Kumar, Jyothi’s husband, told The Indian Express.