Although Pepsi has pulled the obnoxious advertisement for which it had been accused of being tone-deaf, it still hasn’t stopped people from talking about it. If there’s one good thing that has come out of the controversial Pepsi ad, it is Skip Marley’s dope jam Lions which has been stuck in everyone’s heads ever since. That and this parody video which actually seems to make a whole lot more sense than the original. The parody video, which was posted on The Feed SBS VICELAND, features comedian Mark Humphries and has gone viral on the internet.

Titled ‘Black Sodas Matter’, it starts with a miraculous solution to Global Warming- Pepsi. In what seems like a reference to the popular 2006 documentary An Inconvenient Truth, the quips about Pepsi solving some of the most pressing issues across the world. You know, like the Brangelina split. 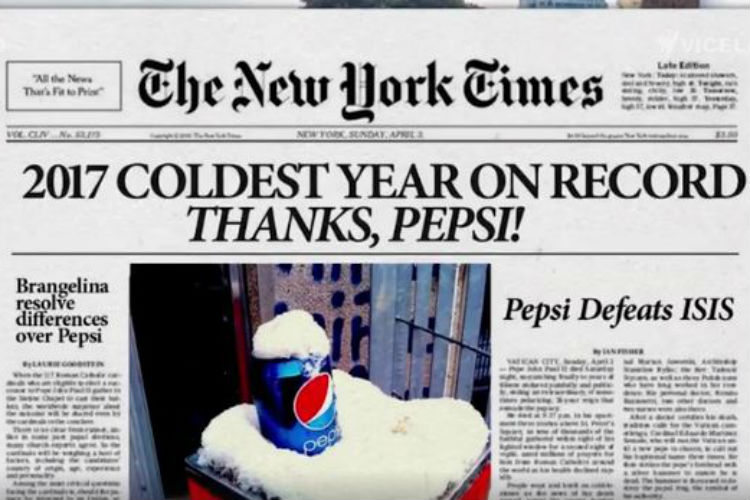 Now since obviously, Pepsi’s powers are limitless, there’s another region that needs a fix, the Gaza Strip. Israel and Palestine resolve their issues over a can of Pepsi and everything is finally settled. Yay, peace! Thanks, Pepsi.

But, how did Pepsi even come to this ingenious solution to all of our problems? How did they manage to end a debate that has been out of anyone’s league for decades? It’s quite simple really, break open a can of Pepsi, cue Skip Marley’s Lions, throw in a social cause with a hashtag and a member of the Kardashian-Jenner family. Viola! You have the perfect advertisement. Makes sense, doesn’t it?