India witnessed its first underwater wedding in Kerala and it was nothing short of a fairly-tale.
A 23-year-old Slovakian, Eunika married her Maharashtrian fiancé Nikhil Pawar on Thursday at Grove Beach, Kerala. They dove deep into the blue Arabian sea and the wedding ceremony took place nearly 4 meters underwater.

Pawar works as a diver at Kovalam and hence the underwater marriage was pretty exciting for him. He told reporters after they emerged from the waters that it was a dream come true to get married undersea, while his bride Eunika said though she enjoyed it, she was a bit nervous at first.

The wedding lasted for about an hour-and-a-half and was organized by Bond Ocean Safari. The organizers said that underwater weddings are pretty popular in the West, but the concept in India remains limited to them being conducted in swimming pools. They said this one is the first ever wedding held in the sea!

They exchanged rings, kissed underwater and took their wedding vows – with the help of placards. 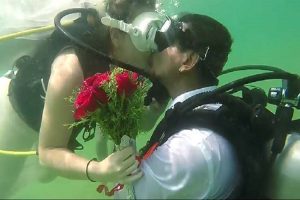 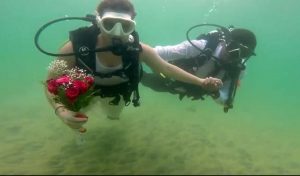 The wedding ceremonies were held in accordance with Christian rituals, with the bride and groom taking their vows by holding up placards. 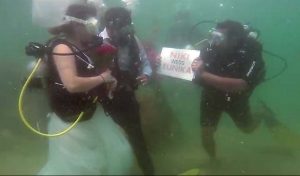 They exchanged custom-made rings and specially designed garlands made of shells undersea in the brief ceremony. 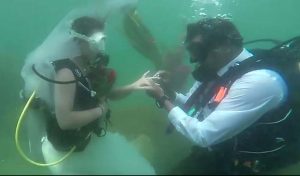 After getting the wedding registered in Maharashtra, the couple is set to get married in a formal ceremony in Slovakia in a few weeks.