When it comes to our smartphones, one thing we hate the most is low battery life. Every time the battery level drops below the dreaded 15% mark, there’s a mad rush to find a charger. But a bunch of people out there decided to cash in on this fear.

While most of us wouldn’t even thinking of starting a conversation if our battery is at 5%, a brand new and rather fun chat app aims to cater to all those who are okay with letting their phones completely die on them due to low battery. The app, called Die With me, only allow users who have less than 5% of battery juice to enter a chat room and talk to strangers while their phones are dying a slow and painful death. Interesting, right? Take a look at their official video:

‘Die together in a chat-room on your way to offline peace’ – sounds kinda weird and morbid, doesn’t it? The app released a few days ago and people are already loving the idea. It was developed by two friends- Dries Depoorter, a Belgian artist, and David Surprenant, a Montreal-based interactive developer. Here’s what the app looks like: 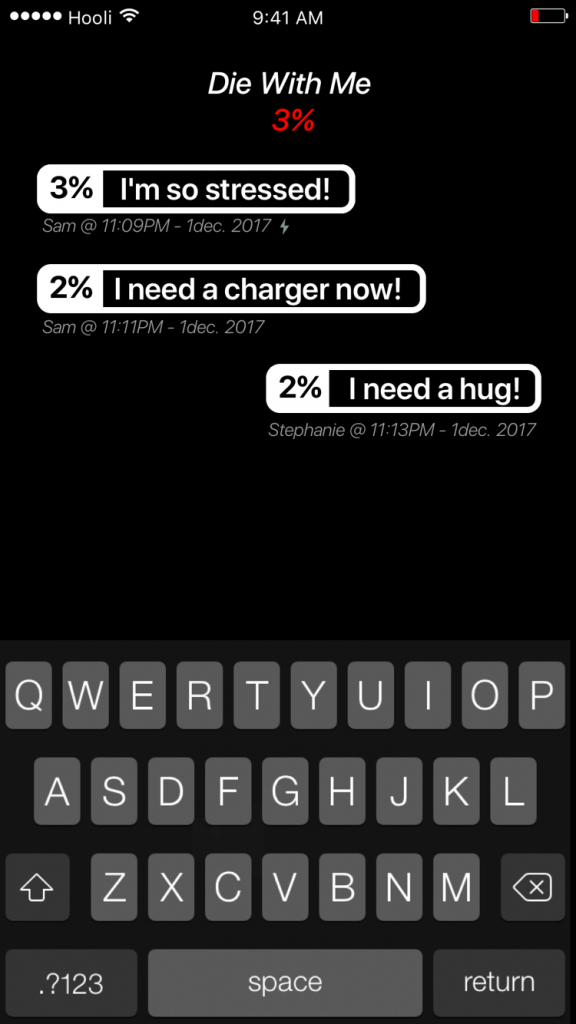 SO basically you go into the chatroom to say goodbye to absolute strangers who are also anxiously waiting to be disconnected from the digital world. Here’s the creepy part- whenever a user’s phone dies, a message pops up in the chatroom with their name followed by the words ‘HAS DIED’. Black mirror vibes, much?

Maybe it’s the much-needed sense of solidarity during the painful experience of watching your phone die, the thrill that you get from the sense of panic, or just plain boredom- but the app is a sure shot hit with a lot of people who are loving the offbeat idea. Check out the app right here  and tell us what you think!