Open up a can of your favorite beer while doing the downward dog – ‘Bottoms Up’ has never had such a literal meaning before ‘Beer Yoga’.
Germany’s BierYoga A.K.A Beer Yoga is an amalgamation of two age-old therapies for your mind, body and soul and all we can ask is why didn’t someone think of this earlier?
The art of Beer Yoga is now catching up internationally. After being embraced by people in Berlin, it has now found love in the heart of Australians who are known for their affinity towards beer.

So how does it go down?
You drink a bottle or two of the golden elixir while bending and stretching your body in an hour-long Yoga session. The beer drinking is incorporated into these yoga poses, in what is sure to be one of the most interesting sessions of yoga you’ll ever have. Just be sure not to spill because it’s BYOB.

Before you start giggling, be aware that it’s not all fun and games!
Founder and yogi Jhula says “BeerYoga is fun but it’s no joke. We take the philosophies of yoga and pair it with the pleasure of beer-drinking to reach your highest level of consciousness.”
The special sessions of beer meets Yoga asanas takes place in tranquil rooms where students can learn yoga poses involving “beer salutations” and balancing beer bottles on their head to improve posture.

These are the kind of Yoga poses you’d be doing: 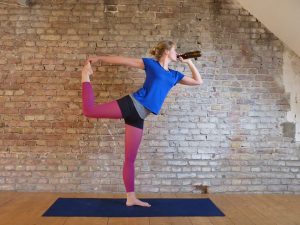 Can’t Nama-stay away, can ya?

Now if someone could just throw in naps into the mix, that’d be great!