Thomas Romain – a French artist who lives in Tokyo- has won the internet.

Romain has worked on a plethora of anime series such as Symphogear, Space Dandy, Macross Delta and Basquash! and has also worked on various French animation projects.
He has recently been winning a lot of admiration from the internet for his best series yet- “A Father and Son Collaborative Design Workshop.”
That’s the name he has given to his series of tweets that showcase the drawings his kids come up. Being children, they come up with with all sorts of bizarre and wonderful sketches and then Romain adds his (amazing) artistic touch to turn them into awesome anime characters.

Due to this stint on Twitter, Romain is gaining popularity online and major networks have been covering his art. And we can see why!

The first illustration was really popular and has been re-tweeted over 5,000 times. Encouraged by this, Romain continued the project, turning more and more of his sons’ drawings into some kick-ass anime.

Check out the mind-blowing artworks: 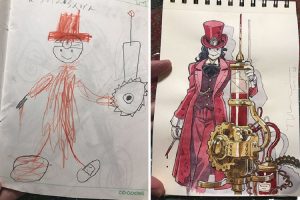 @Thomasintokyo I was pretty amazed when I saw your work, because you’ve coincidentally drawn me. pic.twitter.com/QiHMYpk6sx 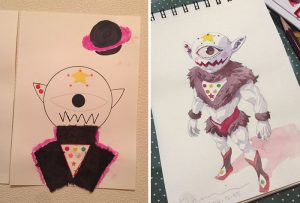 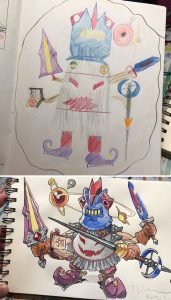 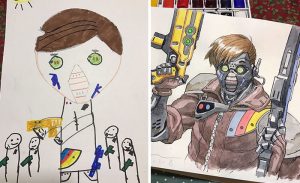 Konnichiwa, Thomas-san. We can’t wait to see what you come up with next!