AR Rahman is a music maestro and there is no denying it. But with Rahman sahab’s latest concert on July 8, some of his fans were unhappy that the musician and composer sang some songs in Tamil. Do you want to know why he did that? Because AR Rahman hails from Tamil Nadu and was composing music for the Tamil industry BEFORE Bollywood discovered him. So when the Grammy and Academy Award-winning music composer took to the stage in Wembley in UK, disgruntled fans allegedly walked out of the concert. Their next pit stop was Twitter (obviously, duh!).

Imagine the righteous indignation of the people who went on to say that it was “disrespectful” for Rahman to “even speak in Tamil”. Another woman went on to rant how she “left halfway through” and she held the organisers responsible for not advertising the fact that “99% of the songs would be in Tamil” beforehand. Actual numbers say that out of the total, he sang 16 Hindi songs and 12 Tamil songs. That looks like 99% to you?

Poor Rahman sahab did not see this coming, with his best works being in his first language which is Tamil and he must have felt bad for being called the ‘Mozart of Madras’ after all this time. Touche, he couldn’t please the North Indians in the crowd who wanted an exclusive Hindi playlist and are ignorant towards South India.

Was total disaster,for someone who made his name in Bollywood(at least on sheer numbers) it was disrespectful from him,even speaking Tamil

A lot of North Indians in their high-headedness decided to vent their frustration on social media. They went as far as posting their complaints to Rahman’s Facebook page to whine about the injustice that had been done with them with most songs being sung by him in Tamil. Interspersed with his Bollywood songs like Jiya Re, Dil Se were also Uppu Karuvaddu, Kalaam yen Kaadhali, Chinna Asai/ Dil Hai Chhota Sa, O Humdum/ Endrendum. 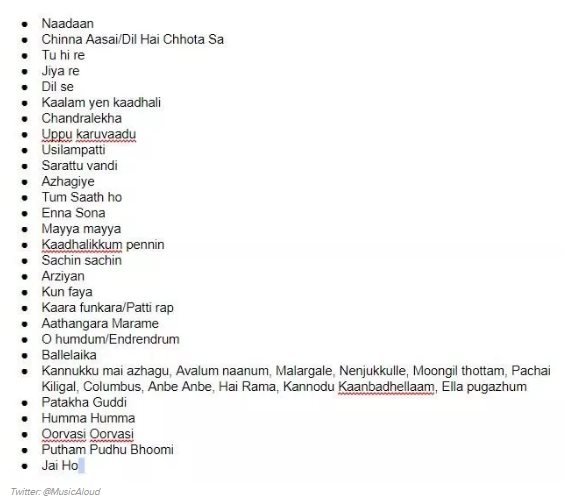 Unable to take the BS criticism, people backed Rahman with burn so sick aloe vera won’t be able to cure it:

Tasting the own medicine eh.. this is how we feel when you do Hindi imposition#ARRahman #antihindiimposition pic.twitter.com/4GIoEh57H7

Hello north Indians, here’s some news for you – #ARRahman is from Tamil Nadu.https://t.co/e2z910WzqC

This is how v feel when Hindi is imposed or Hindi songs r in list in Yuva Dasara Mysuru or Hindi is heard in flight announcement.#ARRahman

Everyone in the world knew that #music doesn’t has #language but #hindi wala guys say music in Hindi language ____ #ARRahman #ARRahmanlive pic.twitter.com/vyreJBCj16

Music has no language and if you can’t enjoy #ARRahman just shows how stupid you all are.. 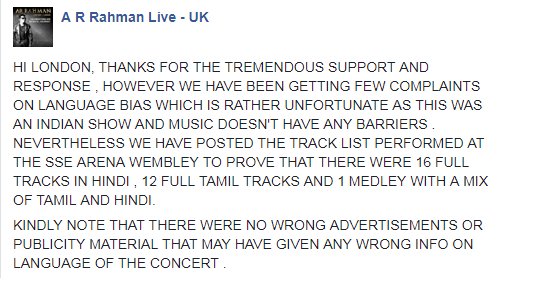 He should just cancel his world tour because there seems to be a crisis in the homeland as the clouds of the Hindi debate approaches again and he must fly back East to console the angry North Indians who want their Rajma Chawal served in Hindi. Or maybe he should just stop singing Bollywood songs and stage a protest, be the rebel! Let that alone douse the outrage. Period.