A nine-year-old applied for NASA’s (National Aeronautical Space Agency) Planetary Protection Officer’s post, the post which was all over internet last week for the massive compensation it offered.  The fourth-grader wrote an adorable ‘cover’ letter to NASA applying for the position listing out his qualifications thereby proving why he totally ought to get the job.

“One of the reasons I think I would be fit for the job is because my sister says that I am an alien’, wrote Jack while asking NASA to consider his candidature. A totally legit reasoning if we may be allowed to say so.

NASA received Jack’s letter and went through his qualifications which involved him having watched alien movies and American television series, Marvel’s Agents of SHIELD. The adorable boy was quite convinced that Planetary Protection Officer’s job requires one to protect Earth from the alien attack.  But the space agency, which was pretty amused with the kid’s job application, replied clarifying the job description.

The agency wrote back to Jack outlining that the Planetary Protection Officer’s job requires making sure that the planet is safe from the microbial attack and not the extra-terrestrial beings. NASA’s job posting was

When 4th grader and self-proclaimed “Guardian of the Galaxy”, Jack, wrote to us about applying for a job, we replied https://t.co/932pj3Q50B pic.twitter.com/RhcGdnzGAw 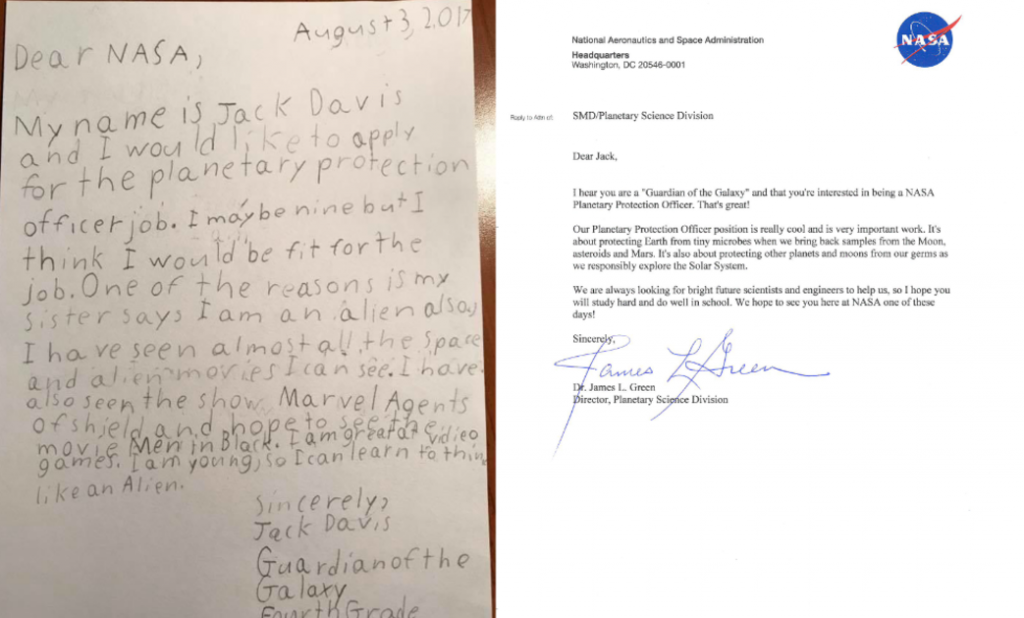 This is how you inspire dreams in children and what a beautiful way to go about doing so. Well done NASA!

Gotta love @NASA encouraging the next generation of engineers and scientists! #lovethis

Does he insist upon being called “Star Lord?”

Omg. So cute. Too cute. Since he is too young may Jack meets @Marvel film set. He can be little alien extra. Come on give boy a role?

(Also read :NASA is hiring a ‘planetary protection officer’ and the salary will shock you)

We still cannot get over this and this tweet is exactly how we feel about it. Also, he signs off as ‘Guardian of the Galaxy’.

“My sister says I am an alien” pic.twitter.com/UqmWAXltWs