For years and years, Biryani lovers have been up in arms against vegetarians terming a spicy variation of pulao as Veg Biryani. Because let’s face it: what is even Veg Biryani? A rice preparation with vegetables is called Pulao or as Biharis call it, Tehri. Why would any vegetarian cook pulao and call it Veg Biryani? I mean why?

We can’t seem to be putting the debate around the Vegetarian Biryani vs the Non-Vegetarian Biryani to rest anytime soon if any of these hilarious memes on the internet are an indication. There is no such thing as a Veg Biryani, that is just pulao disguised in a fancy dressing but it cannot be morphed into the genius of spices that is a Biryani. And mind you, we say Biryani and not Non-Veg Biryani because there is after all no other competitor of Biryani in its truest sense.

And while this Civil War between vegetarians and non-vegetarians continues, we can only hope that Twitter will not go ballistic with memes and jokes galore. However, all you see is the constant activism of devout biryani lovers on social media platforms, trying their best to keep the flag of biryani lovers flying high in the sky.

Finally I met a girl who liked me.
Her other favorite things were:-

When a friend offers you their #Biryani for lunch but it turns out to be a #VegBiryani and you’re just like……#TuesdayThoughts pic.twitter.com/hX5k1Ursom

When you go for a party And they serve only Veg Biryani pic.twitter.com/PEE1X25MLs

Veg Biryani Is not even a Biryani_______ pic.twitter.com/JFtGwdwrnZ

Man: Why is there no biryani in my plate?

Waitress: Sir if I’m not wrong you ordered veg biryani?

Perhaps it is the fact that vegetarians don’t have enough options and they tend to focus on what is not their own. So then let’s not ruin on the legacy of something as grand as Biryani or by demeaning it by giving it vegetarian twist. Call it a Pulao, not Biryani. Period. 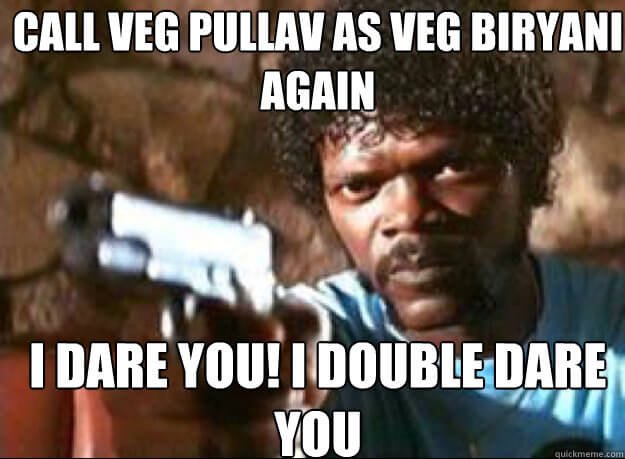