Around 300 whales have died whales in New Zealand’s picturesque Golden Bay on Friday and volunteers were trying to send more than a hundred more back out to sea. Rescuers are racing to save hundreds of lives after the country’s largest recorded mass whale stranding occurred.

The Department of Conservation (DOC) discovered 416 pilot whales had beached themselves at Farewell Spit in Golden Bay at the top of the South Island, with more than 70% perishing by the time dawn broke on Friday.

Moreover, a conservation department worker noticed that the whales were washed ashore on Thursday evening, but the government agency refused to go on a night rescue operation as they had a fear that volunteers would be injured by the whales in the darkn. If the officials would have taken a quick step, more lives would have been saved. 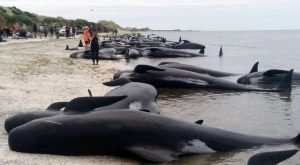 Volunteers somehow had managed to save the lives by re-floating some of the whales during high tide, but most of them were quickly re-stranded as the tide ebbed as reported by local media reported on Friday. 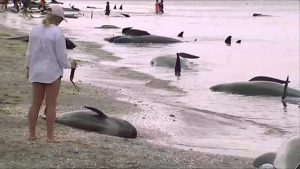 It was also seen that whales often get stuck at Golden Bay which is a remote but popular holiday area at the top of New Zealand’s south island. The bay’s shallow waters make it difficult for whales to return to deeper water, according to marine life rescue organisation Jonah Watch.

The incident was New Zealand’s largest known whale stranding since 1985 when 450 were stranded in Auckland. The reasons for whale strandings are still unclear, but it is thought that a combination of factors are contributing to this, with old, sick and injured whales being particularly vulnerable.