The most famous chaiwala in the world, Arshad Khan from Pakistan, might have become an interenet sensation and landed a modeling contract too. But his much celebrated unexpected success has sparked off a debate on male objectification and an uncalled for bashing of feminists.

The debate has become so shrill that a quora thread asking “What makes you sad about India?” has the chaiwala’s objectification” in particular and “objectification of men” in general as the top answer.

One might question why should the supposed objectification of a chaiwala from Pakistan should make an Indian Quora user so sad about his country. But the more worrying bit is that such an answer finds resonance with many young internet users. They do not see the inherent difference between drooling over a good looking man and using a female body as hanger to sell products or to use her body to inflict unimaginable violence on her.

The greatness of the internet is that it allows people with different point of views to come together and help us form an informed opinion. Although this most voted answer to the question: “What makes me sad about India?” his argument didn’t go uncontested.

If you are a fence-sitter in the debate on whether women calling the Pakistani chaiwala ‘hot and cute’ is male objectification and that it calls for bashing of  “pseudo feminists” you must read these answers to make up your mind. 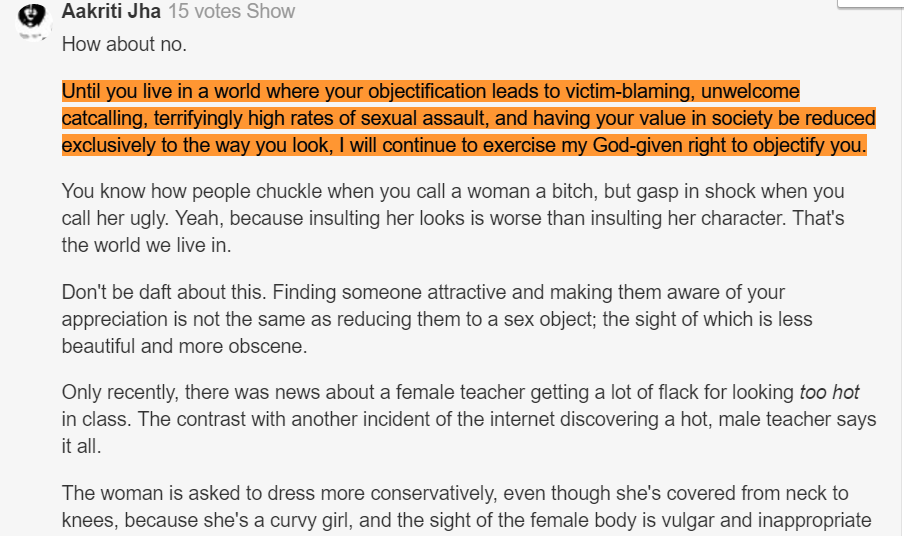