Just when you thought you were over with reports of poop falling from the planes flying above you in 2016, this cringe-worthy piece of news strike. The people residing in DLF’s Belvedere Tower Condominium in Gurgaon are currently going insane trying to fin d the person throwing poop from their building.

No, it was no typographical error. You read that it. In an absolutely bizarre and disgusting incident at the same time, someone is hurling poop on the Tower A of the building. After experiencing this problem for sometime now, the society association decided to take the matter in their own hands and issue a notice on the entrance urging the residents to help them find the culprit.

Don’t believe us? See this notice: 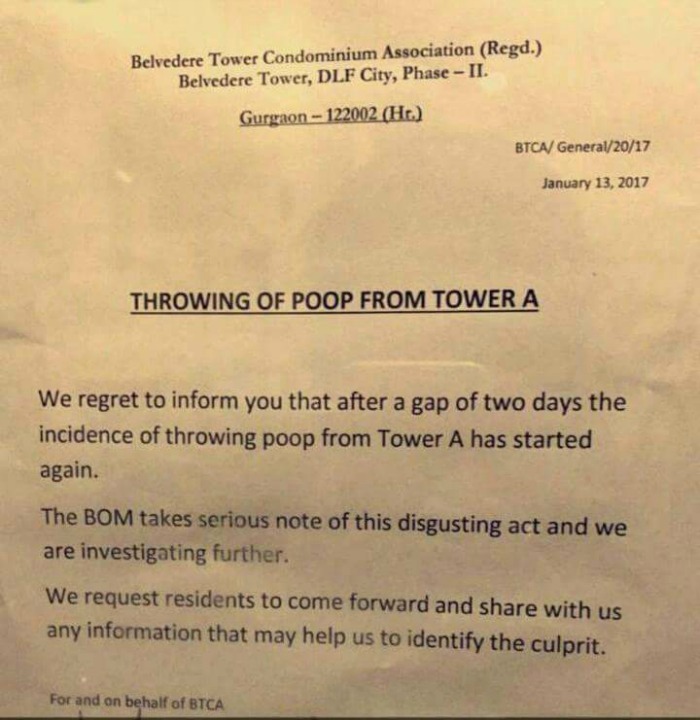 The association has strictly mentioned in the notice that they are investigating the “disgusting act” and have asked the resident of the society’s help to find this bizarre person who probably thinks throwing poop is fun act. I mean, seriously?

However, what we can understand by the notice is that the person did stop throwing poop for a span two days but was back to it soon after. Naturally, the news reached Twitter and they as expected went on a laugh riot.

It happens only in #gurgaon #insane https://t.co/ScWfq09Mq5

It’s raining shit and for once you can’t blame any politician. How weird is that? https://t.co/KcrKq5X29V

It’s raining shit and for once you can’t blame any politician. How weird is that? https://t.co/KcrKq5X29V

In all honesty, this is most sickening and crappiest thing we’ve seen in a long time.