Anupama Chopra recently sat down with Bollywood’s most well known female playback singers from the current generation for an interview with Film Companion. On the round table were singers Neha Bhasin, Aditi Singh, Jonita Gandhi, and Neeti Mohan, whose discussion on how what it’s like to be a female singer in Bollywood disclosed a fact that is an open secret: it’s mighty difficult.

Discussing the huge gender disparity in the industry (and everywhere else), the discussion felt long overdue mostly because these are women in the public eye who have a solid fan base but sadly, not enough work. We wouldn’t blame you if you don’t recognise some names on Anupama Chopra’s panel, even though all of them have sung chartbusters at some point or other.

Let’s start with Jonita Gandhi, who has sung last year’s The Break Up song (Ae Dil Hai Mushkil), and Gilheriyan (Dangal) – both of which were swiped right by the masses. But as Neha Bhasin points out, when she heard Ae Dil Hai Mushkil‘s The Break Up song (which is about Anushka Sharma breaking up with her boyfriend) the number has Arijit Singh’s brand stamped ‘all over it’. Just in case the point isn’t clear, here’s the ‘break down’ again: this song is picturised on the female lead and sung by Jonita, but it has been marketed as ‘an Arijit song’.

The credits on the song posted on YouTube (the topmost search) doesn’t even feature Jonita’s name, but it does mention Arijit Singh and Badshah. 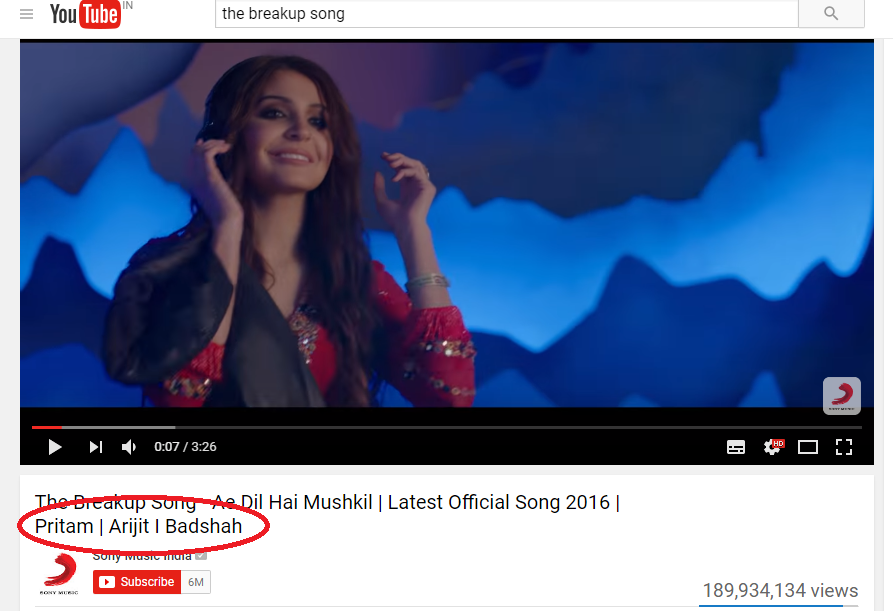 Bollywood is not new to sexism whether we talk about its male-centric movies or whether it is about the lopsided ratio of male singers. More often than not, when asked about your favourite Bollywood playback singers, Arijit Singh (who’s topping all the charts), Badshah, Diljit, Sukhwinder Singh, Sonu Nigam or even Mohit Chauhan would come to mind first.

Why is that? Well, we remember who we hear and we no longer hear female singers like Shreya Ghoshal, Sunidhi Chauhan, Neeti Mohan or Neha Bhasin. Be FM music stations, or various online apps like Saavn and Gaana – the airwaves have firmly been captured by the male voice.

Neha Bhasin who sang chartbuster song Dhunki Lage (Mere Brother Ki Dulhan) for Katrina Kaif, recently  sang a solo for Salman Khan’s Sultan (2016), Jag Ghoomeya, and was nominated for Filmfare Awards for it. But whose name do you remember as the singer of the hit number? Ustad Rahet Fateh Ali Khan. Isn’t fact-checking fun? 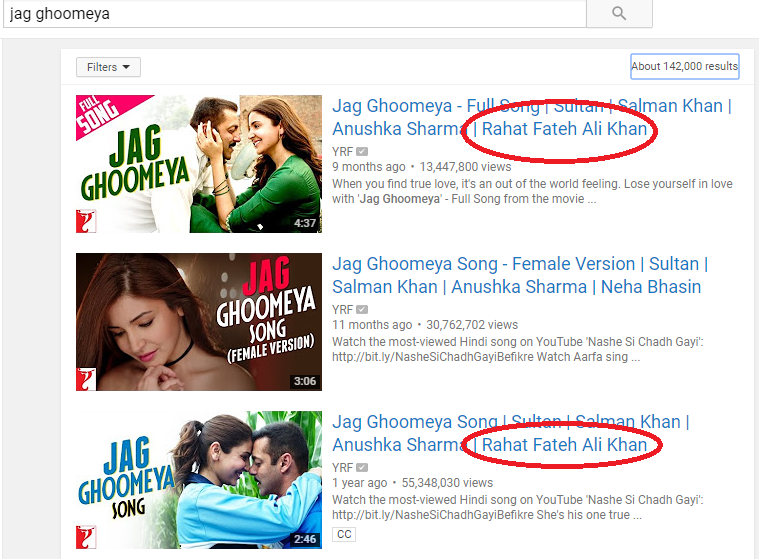 Aditi Singh Sharma, who made her debut with Anurag Kashyap’s Dev D has given some hit numbers like the female version of Tu Jo Mila from Bajrangi Bhaijan. She lend her voice for the 2016 chartbuster song, High Heels (Ki and Ka) and most recently, Naam Shabana‘s solo number Dil Hua Besharam. And, while Neeti Mohan is quite popular and has a huge fan-following, the number of songs she gets to sing in movies is pretty low. She may have won the Filmfare award for the best female singer for Sau Asmaan (Baar Baar Dekho), apart from this and Jiya Re (Jab Tak Hai Jaan), can you even remember the songs she’s sung?

In fact, when we look at the soundtracks and even the hit songs of 2016 and 2017 (until May), we find that the ratio of male singers to females is highly skewed in favour of the males. One could argue that the films are male-centric (which is an issue too) so how can the songs be sung by female singers. Probably the same way female-centric films Dangal or Phillauri have songs almost entirely sung by men. Yes, even in sequences with women.

Dangal‘s hit rap number, Dhakkad was sung by Raftaar, the title track which plays at the entry of the female lead is sung by Daler Mahendi (Dangal title track). The songs and the composition were no doubt amazing, but why didn’t a female singer sing them?

Probably, the need for a male voice for such a song arose because women still need certificate from men for being ‘dhakkad’  or ‘awesome’. The movie also has a beautiful song Gilheriyan, sung by Jonita Gandhi but not many would remember it, because was played in the background of a phase where Geeta Phogat was rebelling against her father’s enforced rules.

Neeti Mohan points out that even when there is a duet in a movie, the female singer only gets to sing a line or two. Packaged as a duet, probably to ensure the film’s female lead gets screen space but in terms of actual lines – zilch, nada, nothing.

Sample this, in the song Baarish from Half Girlfriend – which mentions singers Ash King (male voice) and Shasha Tirupati (female voice) – Shasha doesn’t even have those consolatory ‘two lines’! Don’t believe us? Listen to it here:

So, isn’t it time that our music industry start giving our female singing talent their due and, as Neha Bhasin rightly points out, our Bollywood actresses need to start putting their foot down and asking the producers for solo songs, to make their screen presence stronger.

Do let us know in the comments section what do you think about it.