Young Muslim woman who loves fashion and wear the hijab are no longer staying away from the spotlight. She isn’t shy and she is definitely not afraid to dress in style. She doesn’t see any harm in ditching the plain black headscarf or the traditional burqa, she is ready to experiment and voice her thoughts publicly. She is the millennial Muslim woman who believes that her faith won’t be moved with the colour she decides to drape over her head. She has coloured and embroidered headscarves for different occasions and she doesn’t need a validation from mainstream designers to tell her that they approve of her identity.

On her way to this apparent mayhem, she hopes to change the entrenched western view of the veil as a sign of oppression of Muslim women. The headscarf has been a hot topic of contentious debate for feminists, religious conservatives, and even secularists.

This Ramazan, InUth spoke to some amazing hijabi women who have made the choice of the headscarf and stepped into the limelight unabashedly.

Shanaz Rukshana of The Hijab Company realised that India didn’t have a lot of brands that catered to Hijabis or Modest Fashion. Shanaaz’s idea to bring modest fashion trends hot out of the stove for Indian Hijabis garnered a lot of support on Instagram. While Shanaz herself may not be a full-time Hijabi, it hasn’t deterred her from conforming to the growing fashion needs of the Indian Muslim women. 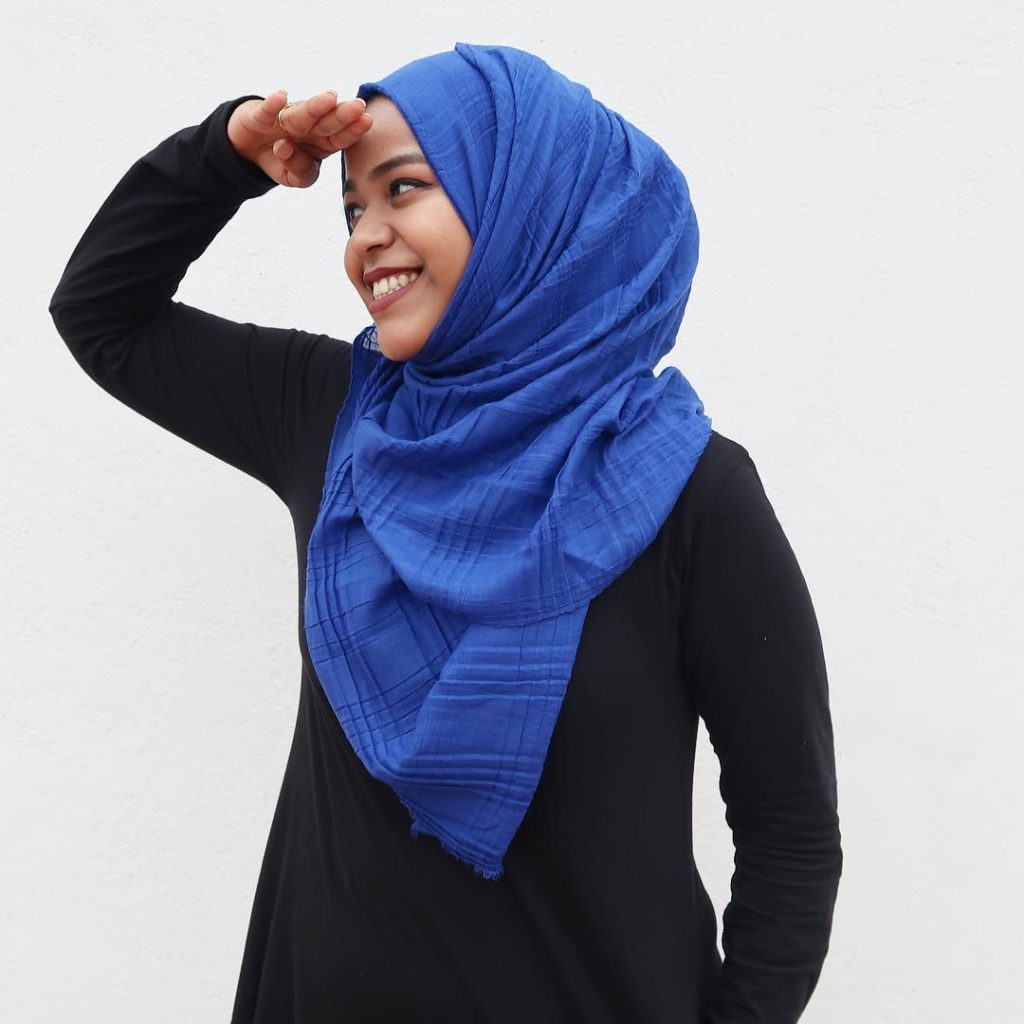 Muslims in India adapt to the cultures they grow with. For example, saree is not a Muslim code of clothing. But you can make it work with a coordinated hijab and a modest blouse. So if we were to be given an identity, it would be constantly changing and adapting to where we are. As much as I remember as a kid, Abaya (burqa) was once termed as an orthodox outfit. Now you see Abaya’s that are exported from all around the world; Turkey, Malaysia, Philippines, UAE and so on. It’s one of the most trending modest fashion clothing on the charts.The same can be applied to Hijab; Hijabs come in so many varieties and designs that you need to be on your toes with catching up trends. We are human and we are prone to evolve along with our identity. When I started wearing the hijab when I was 10 or 11. Even though its been an off and on commitment, I have always loved my hijab. Right now, I don’t want to be a self-claimed hijabi. I have my hijab on almost 90% of the times, I’m working towards the final 10% lap. I’ll get there someday, no pressure.

Ramsha Sultan is a Fashion and Lifestyle Blogger who is also a Electronics & Communication Engineer graduate. Ramsha is a fashion enthusiast and although she didn’t just stop at the Hijab, she ensured that it was an integral part of her styling tutorials and v-logs. She feels that her choice of the hijab has empowered her more than anything. For her, Islam has always empowered women and encouraged women education but it is only the cultural barriers that have left the women tied to the shackles of baseless oppression. 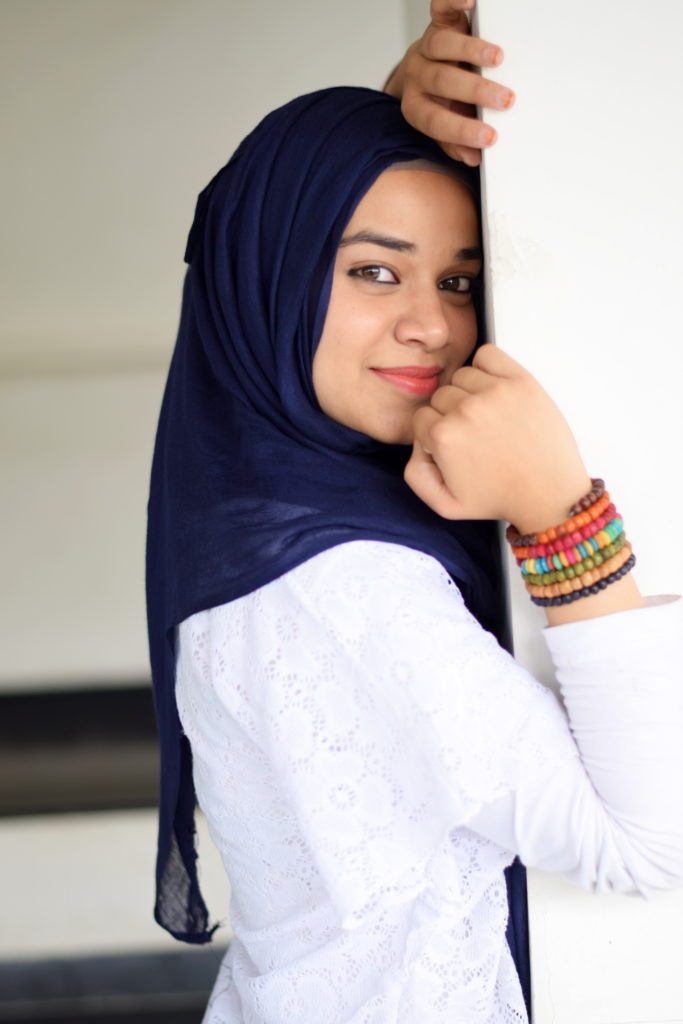 Ramsha Sultan does DIY videos on Youtube about everything from fashion fixes to hijab styling.

I always made a point to dress modestly but I wanted to break through the typical Abaya Tradition. Gradually I became more bold & confident in showcasing Hijab fashion in the Indian Society. There is no rule in Islam to wear Abaya specifically, it’s about dressing up modestly and that is exactly what I did. No one can pin-point me for being indecently dressed, but I like to give my hijab a stylish twist. Nobody forced me to wear Hijab or dress up in a certain way. My parents always made sure I got good education in all fields, balancing the Islamic education and the knowledge of the immediate world. When you provide a person with all the raw material and let them decide on their own, the best life decisions are made. Wearing Hijab was mine. Since then, I always made a point to let people know that Hijabi women are not oppressed, rather they are bold & strong inside out. Nothing has empowered me more than wearing Hijab and exuding fearless confidence.

You can watch one of her videos here:

Ayesha Nawab is a hobby pilot and a Cambridge Certified teacher of English. The founder of Mysha (which customises hijabs and other Muslim clothing) and a private pilot who trained in Australia, Ayesha chose to redefine fashion as she mixed culture with her religion. Her followers know her by the name of Miss Nawabi and appreciate her for the mélange of vintage and new-age fashion she brings to them. 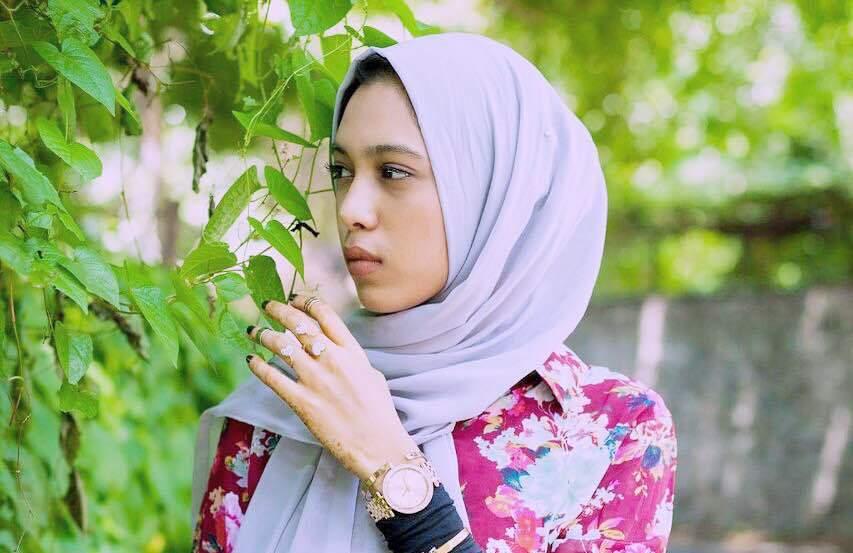 I joined Instagram a few years ago and I have always felt that me posting myself with pictures in Hijab will only give a light to some of those struggling Hijabis/ non Hijabis who may get an idea that Hijab can be modest and stylish. India has always been dominated by the burqa culture and Muslim women are hesitant to experiment with it. For example they would never wear a floral print or an embroiderd burqa or hijab. I wanted to bring a fashion element to our culture, not to adulterate it, but to give it more colours and a voice. The idea of the veil in my family was always the same, any country lends its cultural influence to any religion. We may choose to dress differently, but our faith is the same.

Check out this amazing video where Miss Nawabi thrashes the ban on hijabs and the absurdities attached to it:

In light to the recent hijab ban. Watch and if you feel Im right, Support and repost or spread the word. We are people of the world. We needn’t have to live at every step being judged or pointed fingers at. Every person has their own faith and belief. But at the end of the day every religion only teaches love, peace and coexistence. And we are just human. Why discriminate each other. Imagine a world where every human only lifts the other one up. You can take the first step. You don’t have to do it for religion. But you can surely do it for HUMANITY. Repost with #stophijabban . . #europe #hijabban #hijabi #humility #nopride #equalrights #women #womensworld #girls #workit #love #spreadhummusnothate #nohate #nohatenofear #chicmuslimah #hijablover #hijabifashion #hijabfashion #fashionblogger #themodestymovement #keepitsimple #support #alhamdulillah #humanity #muslimwomen #lifteachotherup @muslimsoftheworld1 @muslimahchamber @chic_muslimah @hijabfashion hijab from @hijab_house

With the growing number of fashion brands and multinational companies showcasing Muslim models fashioning hijabs, some women from Muslim backgrounds aren’t too happy with the trend. Dolce and Gabbana, H&M, Pepsi, Nike are just a few names that are plastering the women wearing a hijab on the face of their advertising campaigns.

From Ramadan collections to their newly designed sports hijabs, were these MNCs hoping to encash on the Muslim customer in their holy month, Lord only knows. But no matter what you say, the traditional headscarf or the Hijab for the Muslims has made its way into the high-fashion streets. While it has left some Muslim women divided it has also given a unique voice to those who are experimenting with the hijab.

The internet is a mean place and as Ayesha recounts she was repeatedly discouraged from displaying her photographs on social media even if she was modestly dressed. From the internet haters to online trolls, people have given them a hard time but these hijabi women are here to stay.