The Ministry of Health and Family Welfare tweeted a photo propagating their version of good nutrition, triggering general indigestion in the masses.

This is the image they put out before deleting it thanks to the outrage that followed: 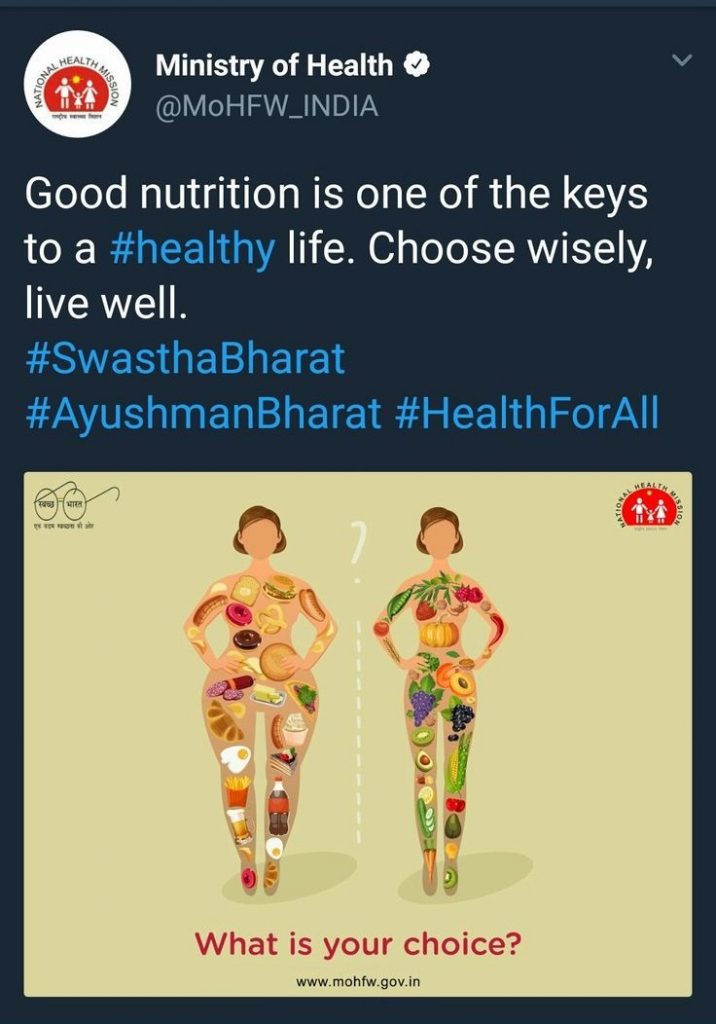 The person on the left is leading an ‘unhealthy life’ because of junk food and non-vegetarian items such as eggs and meat. The person on the right is clearly a vegetarian, and thus ‘healthier’. Now while we all know where junk food stands in the healthy vs unhealthy debate, intake of meat is purely an individual’s choice. Also, are women the only ones who don’t need protein? Because the choice of the image seems rather dicey.

Not even addressing the fat shaming bit.
It’s pathetic that this kind of RSS propaganda is being spread shamelessly.

Eggs, the near perfect meal you can have, is unhealthy according to our agenda laden Ministry of Health.
MOH thinks only vegetarians live a healthy life.
Now I know why Gujarat and Rajasthan, predominantly vegetarian states, do not have a single case of obesity and diabetes. https://t.co/eRUs3mgUeW

You want the country to be fit and healthy, @MoHFW_INDIA ?
Make fitness test mandatory for all MPs and ministers with health reports available on the public forum. Get your own people in shape to walk 100 metres before you start fat shaming people.

Wow, eggs are bad?!
It’s one of the cheapest sources of complete nutrition, and probably adds to a lot state revenue.

.@MoHFW_INDIA Here is the fat shaming pic which has been deleted by the Ministry of Health and Welfare. pic.twitter.com/CI0VXvMfwd

According to India’s Ministry of Health, eggs make you fat. Is this the most anti-science government ever? pic.twitter.com/ukHc5MLtNQ