The fact that there is no best friend more faithful and unconditionally loving than a dog, is well established and beyond doubt. As Josh Billings aptly put it, ‘a dog is the only thing on this Earth that loves you more than he loves himself’. So, when US Air Force’s Kyle Smith realized his 11-year old German Shepherd’s last few days were near, the soldier could not have left his mate’s side for even a second. That’s the least we can do in return for the unconditional love dogs give us, after all. 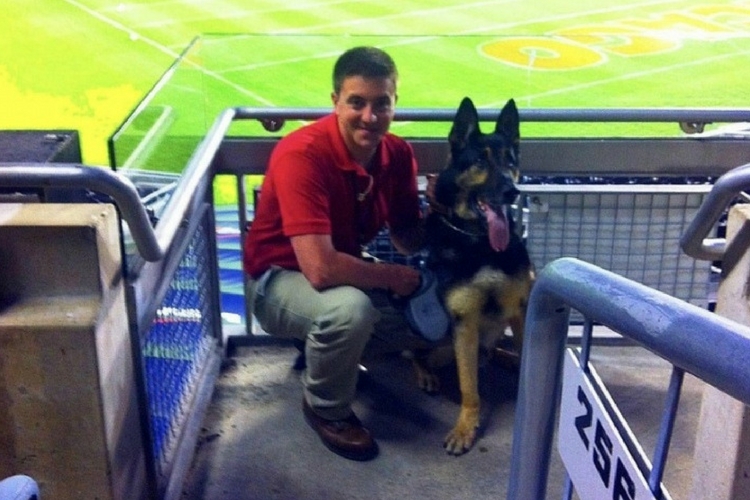 Bodza joined the US Air Force in 2006 but it was not until 2012 that he and Smith became a team. Kyle was quick to adopt Bodza when it was time for the Air Force dog to retire. The two formed an unbreakable bond and it was very tough on Smith when Bodza developed degenerative myelopathy, a progressive and incurable disease that affects a dog’s spinal cord. When things started getting worse, Kyle had to take the call that is best described as one any dog owner dreads taking. Since Bodzo wasn’t going to get any better, Smith decided to put him to sleep and rid him of all the pain.

When Kyle went to a clinic to bid goodbye to his best friend forever, the moment was anything but easy on him. He hugged Bodzo till the last second of his life and sobbed uncontrollably. In an emotional post, Dogs of Freedom put out this tear-jerking post on Instagram.

Kyle Smith and his dog Bodza lived through a lot together. As members of the U.S. Air Force, they’d both once spent 189 cold and bitter days together in Kyrgyzstan while on a security mission. Since 2006, Bodza had worked with the USAF as an EDD, and he’d helped save human lives by sniffing out bombs in operations in Iraq, Kyrgyzstan and Kuwait. Smith started working with Bodza in 2012, and the pair formed a fast and lasting friendship. “I loved working with him because he taught me a lot – patience as a young handler, and how to understand that this job isn’t just about you,” Smith told the Dodo. When the day came for Bodza to retire, Smith didn’t think twice about adopting him. “I took him home the same day,” he said. “He was even more loyal at home. He followed me around everywhere. He would lay his head down flush with the bed and tell me good night, every night.” Then in the summer of 2016, Bodza was diagnosed with degenerative myelopathy, a progressive and incurable disease affecting a dog’s spinal cord. “Over time, his hind limbs lost their use and he could barely stand up anymore, much less walk,” Smith said. Knowing how hard Bodza’s life had become, Smith made the difficult decision to put Bodza down. Last week, Smith, along with 9 of his coworkers, took Bodza to the Fort Bliss Vet Clinic in El Paso, TX. “I was holding Bodza as he passed,” Smith said. “It was a rush of so many things. It was just overwhelming.” Smith broke down but his coworkers were there to support him. “They let me sob like a baby,” Smith said. “My boss immediately went and grabbed a flag, and draped it over him and let me have a final moment. It was incredible. There was heartache and peace all at once that came over me.” Smith had Bodza cremated, and keeps his ashes at home, along with photos of his best friend. He also keeps Bodza’s collar on the rear view mirror of his car. “I will never forget how loyal he was,” Smith said. “He was selfless – more than any human I’ve ever known. He’s done so much for next to nothing and did it with a smile. I miss him every day.” SC: The Dodo #battlebuddy #mansbestfriend #wardog #usaf #loyalty #dogsoffreedom

This story is just giving us so many emotions at the same time. Dogs maybe indeed become a part of not just our lives, but our heart and soul. RIP Bodzo.