To compete with rivals in a possible future market of air taxis, luxury sports car maker Porsche is mulling over the idea of developing a flying passenger vehicle, according to the car maker’s head of sales.

Speaking to a German magazine (automobilwoche.de), Porsche sales chief Detlev von Platen said that journeys could be cut down to a tenth of their current length by utilising the airspace.

“That would really make sense. If I drive from [the Porsche plant in] Zuffenhausen to Stuttgart airport, I need at least half an hour, if I’m lucky. Flying would take only three and a half minutes,” he said. 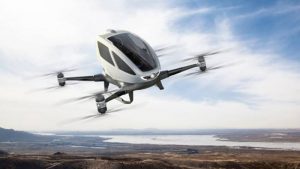 The magazine said that under Porsche’s plans, passengers would be able to have some control over the flying vehicle themselves but would not need a pilot licence because many of the car’s functions would be automated.

The German automaker hasn’t confirmed or offered many details, however, if the company has one in the works, it would join a long list of companies working on designs for flying cars in anticipation of a shift in the transport market.