For the longest time, slapstick humour and cross-dressing were the benchmarks for the comedy scene in India on shows like Comedy Circus, The Kapil Sharma Show and The Great Indian Laughter Challenge. In case you were wondering what comedians did before the web gave them an excellent outlet, that’s exactly what they did. Their jokes, and they themselves, were often found ‘playing’ at drag. Recent years, and 2017 in particular has given us a class of stand-up comics who have managed to pull themselves above the crowd and hit the spotlight with punches that are strong enough without the need for props.

Gone are the days when the Indian audience was forced to shove down a variety of humor that was vulgar at best, today’s stand-up comedians are ready to offer a different course for the palette of the millennials.

The Indian stand-up comedy scene has picked up quite well in the year 2017 if the number of stand-up specials is any indication. 16, that’s how many stand-up comedy specials feature on Netflix and Amazon Prime Video, with 14 belonging to the latter alone. But. And yes, there’s a huge but. Of the 16 totally-worth-a-watch specials – 15 are by men.

Indian comedy has diversified with experiments across formats from podcasts to sketches to game shows to political satire, but somehow in a sea of stand-up comics, only one woman managed to get a comedy special. And believe us, we thank god for the existence of Aditi Mittal everyday, but seriously? Just one?

In a patricarchal world, it should perhaps not be surprising that women are STILL not considered funny enough. At least the lack of investment in them seems to point at that school of thought. Feeding them an occasional spot on Canvas Laugh Club’s esteemed stage is like giving them an appetizer to run their profession instead of the main course.

For instance here are 7 of the most popular stand-up comics:

And here’s the most popular (also only) standup comedy special by a woman: 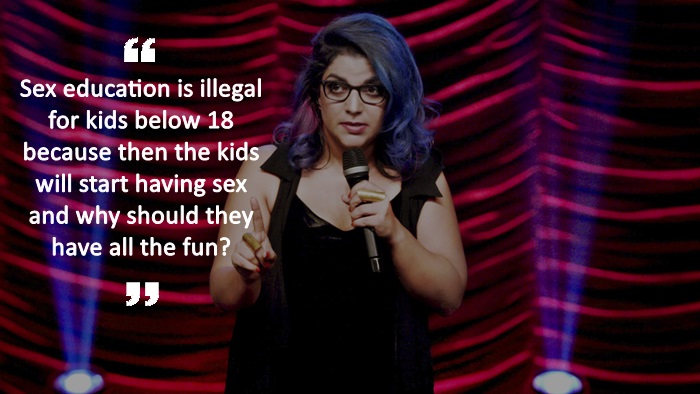 Aren’t there are more women in the comedy scene who could have helmed shows? Well, there are. But who invests in women, right? The sad reality is that despite having women like Radhika Vaz, Anuradha Menon, Neeti Palta and Vasu Primlani who have managed to create a laughing riot, they still do not find investors who would back them up. Unlike Mallika Dua who comes from a relatively privileged background or Sumukhi Suresh and Kaneez Surkha who the backing of the boy band of stand-up comics, All India Bakchod (AIB), supporting them by casting them in their sketches, the majority of female stand-up comics do not get the attention they deserve.

So, would you like to see more women making you laugh? Tell us in the comment box below.