Social media has slowly turned into a place where people take refuge behind their computer screens and go on to bully just about anybody. Body-shaming and taking people down for being heavier than we want them to be or even skinnier than we want them to be, is an everyday affair. So, when this lady was trolled on Instagram for her weight it came as no surprise, but what happened next sure did.

When 20-year-old La’Shaunae Steward from Charleston, South Carolina, posted a few selfies on her Instagram account to show off her self hand-frayed skirt and cool t-shirt, some decided to see everything apart from this. For someone who had always wanted to skateboard, Steward was very proud of her ‘Thrashers’ tee and took to Instagram to share it.

it took me a week to make the fraying on this skirt. #vbo

Somehow her post incited this particular Twitter user to take this chance to troll her in the most hurtful way possible, probably because of lack of anything better to do with his/her own life. Of course a comment followed by somebody who is a ‘Cool Guy’ and ‘hates fat humans’. Yes, whatever that means.

so does she eat skateboards cause she sure as hell doesn’t ride them pic.twitter.com/zip8B6KHsr

@IuIIed she eats people who ride them

Steward herself said the meme and comments immediately pushed her back to memories of being bullied all throughout school for her weight and how she never took to learning skating for the fear of being ‘too fat’. The comments took this young lady’s confidence down, but before things took a turn for the worse several on social media came to her rescue and showed the trolls their place. 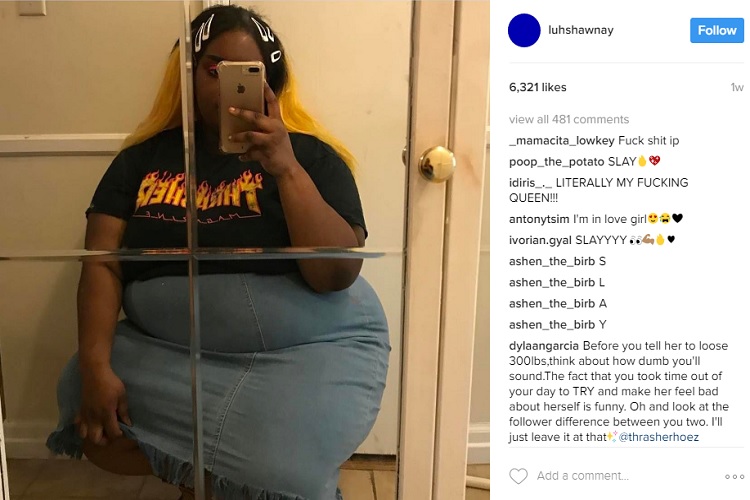 Model Reece King came out in her support on Twitter and shut a few trolls up as well.

she can wear whatever she wants regardless her weight & still minding her business not concerned w/ any of y’all whom she doesn’t fuck w/ https://t.co/xBDf0TnwBy

Twitter user @cheesethedog drew her into a badass cartoon and Steward loved it.

@boneyaardadventures drew me and this is my new favorite thing

So the next time you go on to troll someone on social media for whatever reason, make sure you remember that you might instead end up getting trolled. Moral: It’s a good idea to mind your own business when on social media.