It seems like a season of bizarre and extraordinary scorecards. Northern Districts, a women’s cricket team from Australia, put up a monumental total of 596 runs for 3 wickets in a 50-over game. Apart from scoring at a run rate of 11.92 runs per over, the Northern Districts bowlers bundled out Port Adelaide for a mere 25 runs in just 10.5 overs. Hence, they won the match by a record margin of 571 runs.

No double-century was scored by any batsman in the innings. Four batters scored centuries to contribute to the gigantic total.

As far as high scores are concerned, everyone expects the number of sixes to be in double digits. But, this was not the case in this match. The innings had just 3 sixes, which means that the batters were not just slogging on every delivery. A total of 64 fours were hit in the innings, amounting to 256 runs.

It can be ascertained that the running between the innings was top-notch as they completed 222 runs through singles, doubles and threes.

Openers Tegan McPharlin and Tabitha Seville scored 136 off 80 balls and 120 off 58 respectively. Whereas middle-order batters Sam Betts and Darcie Brown remained not out, scoring 124 off 71 balls and 117 off 84 respectively.

Here’s what the top-scorer McPharlin had to say about the record while talking to abc.net.au:

“It’s pretty cool that, at the end of the day, we potentially have a world record. It’s pretty unreal to make a total like that. At the time, we weren’t chasing any records or trying to set any benchmarks in that way. We were just playing cricket shots,” McPharlin told abc.net.au. “The runs just kept piling on. There were only three sixes hit for the entire day for us. It just shows that we were willing to run between the wickets and hit along the ground and actually play proper cricket.”

Here’s the record that will force you to scratch your heads: 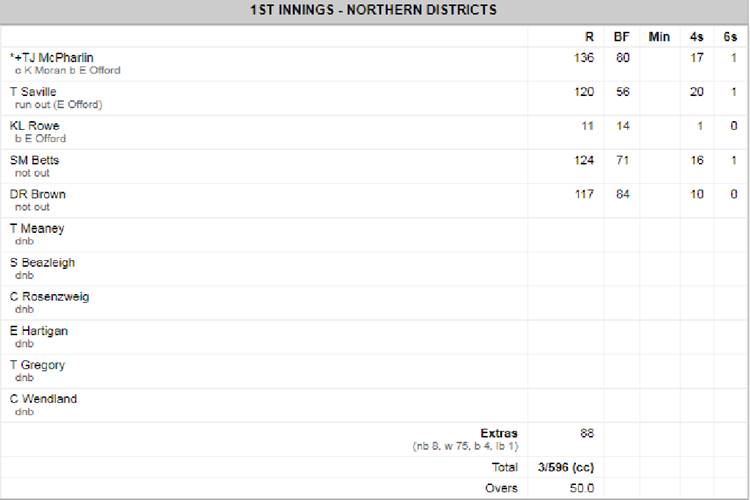 ALSO READ: 7 Chinese Batsmen Get Out For A Duck Against Nepal, Create T20 World Record

The bowling must have been horrendous as Port Adelaide bowled 75 wides and 8 no-balls. 8 free-hit chances must have helped the Northern Districts batters to get on the top of their game.

The highest one-day score in women’s cricket (ODI) is 490 by New Zealand against Ireland. However, the margin of the win remains unmatched.