The 2018 Commonwealth Games has begun in Australia’s Gold Coast amid much fanfare. Around 4,000 performers entertained thousands of athletes and fans at the Carrara Stadium.

The event also witnessed a protest where a few dozen activists blocked the Queen’s Baton Relay and demanded the cancellation of the event.

It’s not the first time the multi-sports event has been met with protests. Whenever Australia hosts the game, people who have been oppressed by the crown unite to resist what they call ‘colonial activity and authority’.

For those who are not acquainted with its history, Commonwealth is a collection of countries that were once part of what is now called the Great British Empire. The empire has gone and the countries are independent now.

However, 53 former member states of British Raj signed up to maintain links with each other through education, sports, culture, and literature. And the multi-sports event was the most significant demonstrations of their ties.

As far as participation in a sporting event is concerned, one should have no problem but my gripe with Commonwealth games starts with its strong colonial hangover and its inability to overcome it.

Since the Queen is the head of the Commonwealth, she is the one who officially inaugurates the Games every four years. This time, though, the Queen did not show up, so her son and heir to the British throne, Prince Charles did the honours on her behalf. 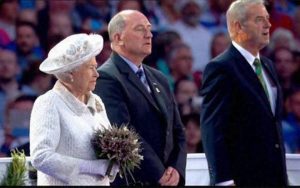 Why should we be party to this quasi-global fete that still uses the name of the queen? Have not our forefathers fought hard to free India from this very name?

And why are we so obliged to bestow this courtesy to a monarch under whose name India was plundered and looted to the hilt.

Initially called ‘British Empire games’ (1930-1950), the nomenclature of the event changed depending on the political ties with its colonies. The event was organised “as a means of increasing the goodwill and good understanding of the British Empire”.

Now, the event’s motto is to promote a set of values, including democracy, gender equality and international peace and security. During the British Raj, colonizers never gave two hoots about even one of these attributes. Also, a majority of Commonwealth states criminalise homosexuality with laws passed in colonial times. How can this association promote gender equality?

The imperial high-handedness is also evident in how Great Britain chooses the countries to host the games. Britain tops the hosting list with six games, followed by Australia, Canada, and New Zealand while Jamaica, Malaysia, and India are the only non-white countries to have hosted the games, according to The Indian Express. Despite 18 African countries being part of the Commonwealth, the games have never entered the continent.

For most of the sporting planet, Commonwealth games hold little importance as the event is bereft of most of the top performers. So much for the celebration, Commonwealth reminds us of our colonial past and reeks of British supremacy.