Indian captain Virat Kohli likes to keep his personal life private. But, as he is a superstar and is involved with another superstar Anushka Sharma, people are curious about them. This ultra curiosity has led to some very uncomfortable situations. This ultra curiosity led to another uncomfortable situation for a school management when a ridiculous question was asked in exam. According to reports, Physical Training students of a local Thane school were asked in exam who Virat Kohli’s girlfriend was?

Shockingly, not even this ridiculous question was asked in the exam, three options were also given to the students. They were Priyanka Chopra, Anushka Sharma and Deepika Padukone. 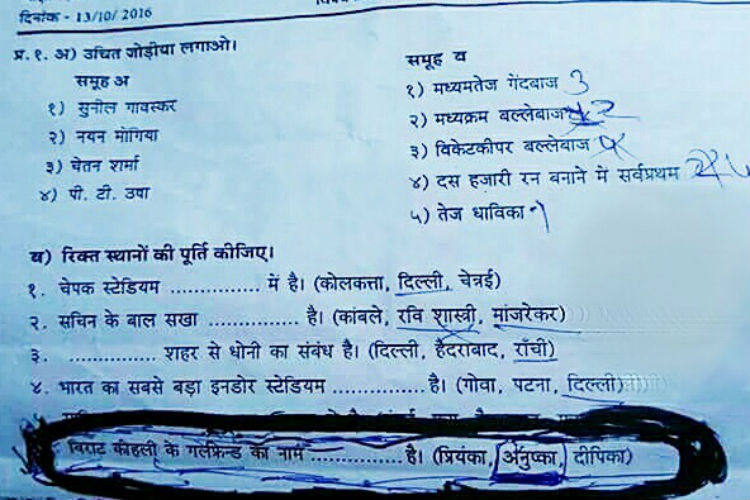 After the post got viral on social media, the principal has shifted the blame on the PT teacher,  saying he had set the paper. The principal added that he would take corrective steps in this regard.

Though, the goof-up will be corrected as the principal said, but this exposes the mindsets of people and their over curious attitude towards the personal life of the two stars. Actress Anushka Sharma was trolled several times on social media for Virat Kohli’s occasional bad performance. Whenever Anushka Sharma came to watch a match in which Virat Kohli was playing, and if he failed, Anushka was mercilessly trolled as the reason for his failure.

Virat Kohli had been upset about this mean habit of his fans. A few times, he expressed his displeasure at this. Kohli had said in a tweet once that Anushka was not the reason for his bad performance. He had written that she had only motivated him to perform better. As of now, it is rumoured that the couple has separated.