She is Martina Hingis—the 20th century’s youngest Grand Slam champion. Having suffered a series of injuries at the age of 22 and then a two-year doping ban, the very fine tennis player faced numerous retirements and returns to active tennis, and thereafter in 2015, she paired up with Paes to win the Australian Open mixed doubles title.

It has been a give and take relationship, with both India—Paes in mixed doubles and Sania in doubles—and Martina gaining success from each other. When she came out of her first retirement in 2006, a huge boost awaited her when she clinched the Australian Open crown with her partner Mahesh Bhupathi. The win was nothing less than a landmark for her since it gave the athlete a belief that she could do wonders at the highest level.

On the giving part, Martina had been very generous. Sania Mirza’s career has been on an upswing since she partnered with the Swiss legend—the pair has reached six finals in 10 tournaments, climbed to the World No 1 spot, and bagged the Rajiv Gandhi Khel Ratna back home. 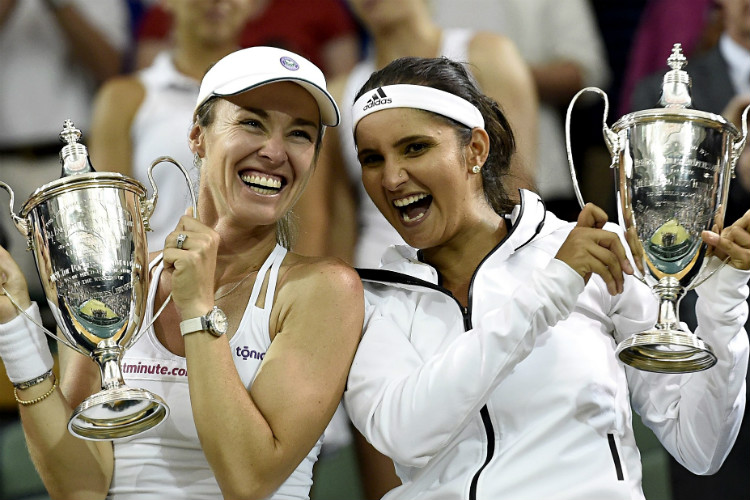 Switzerland’s Martina Hingis (left) and Sania Mirza pose with the winner’s trophies after beating Russia’s Ekaterina Makarova and Elena Vesnina in the women’s doubles final of the Wimbledon Championships 2015 in London. | AFP

As brilliant as it may seem, Hingis believes Paes to be a very ‘giving’ person—a character she feels is pivotal to generate chemistry in and off the field.

He is amazing and is always worried about me being fine. We complement each other on the court very well, and I feel that with him on the court, nothing can go wrong. He is a great human being. I’ve been to India four times. I’m meeting the Prime Minister and everything. It was incredible today, the chemistry between myself and Leander.

Well, now that the Swiss legend has for long been a lucky mascot for the Indian tennis, we pray that the partnership brings forth great results in future.