Fans adore Dwayne The Rock Johnson for the rib-breaking action he would bring in the WWE ring. His signature move ‘the rock bottom’ or ‘the people’s elbow’ are still super hit among his fans. His theatrics in the ring and the way he said profanities to other wrestlers are a thing to remember. All this made him ‘the people’s champion’.

His popularity in WWE is what made him a Hollywood action superstar. He has also done a lot of comedy movies and is good at making a fool of his himself to make others laugh. Take this video for instance.

The superstar’s toddler daughter was getting bored at home. Dwayne The Rock Johnson did something áww’-dorable for the child. He came home dressed as a cartoon character Pikachu and danced around his daughter. The child was happy to see ‘Pikachu’ dancing specially for her. 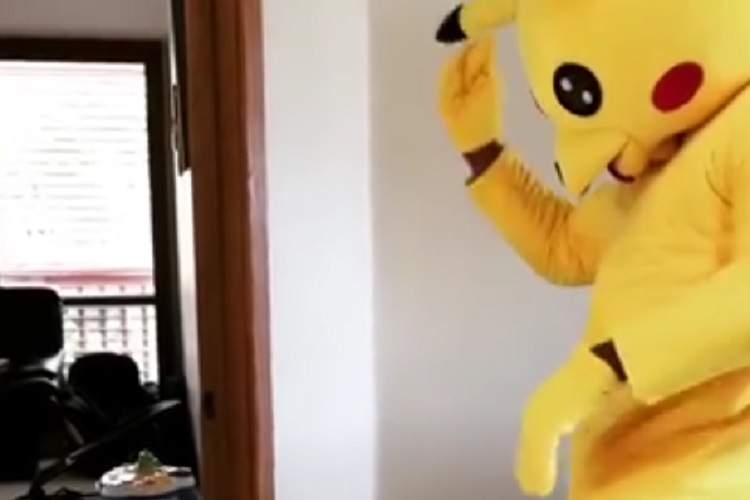 “Pikachu is baby Jasmine’s FAVORITE character. So, for Halloween me and @laurenhashianofficial decided the real life Pikachu was gonna come to the house for a visit. What Pikachu didn’t know was that Jazzy would start crying when he stopped dancing and demanded he continue to shake his tail with a loud “EH!”. So, Pikachu danced over.. and over.. and over.. and over… and over.. again,” Johnson wrote on his Facebook account.

He further wrote that he was feeling really hot inside the suit but that’s what daddies do. This incident clearly showed that behind those bulging muscles of his, beats a soft heart.

Dwayne The Rock Johnson is an established Hollywood actor. He is the only WWE star who  came into movies and got successful. He is a regular in the Fast and the Furious franchise and is doing movies regularly. He has become one of the most sought after action movie stars today. Apart from Fast and Furious, he is also a regular in JI Joe franchise.