Virender Sehwag once again shows his witty side to fans in his review of India-England T20I series. Sehwag used his show ViruGyaan as a medium to troll England team who recently lost the T20I series to India by 1-2. Sehwag said the India lost the first T20I out of respect towards England as a token of love for their guests. He said,  ‘‘Kyun ki gore ka bhi to dil raakhna tha”. This just marked the beginning of the show.

He came up with an excuse for Virat Kohli, Suresh Raina and MS Dhoni’s lack of form. He said that these batsmen gave youngsters a chance to prove themselves by underperforming. This led to Bumrah’s star show in second T20I in death overs, winning the game for the home side. 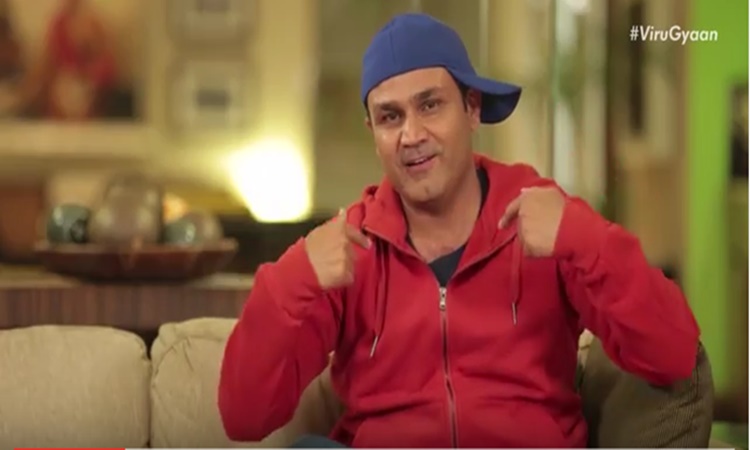 He criticised Sri Lankan umpire Kumar Dharmasena’s umpiring as well as he failed to see a definite inside edge off the bat. Then came another witty excuse for leg-spinner Amit Mishra’s no-ball. He said that Mishra was unfortunate because, “Jidhar uske per pade waha powder na tha”. He also leaked inside information revealing that KL Rahul performed exceedingly well in second T20I to save his berth in the side.

He introduced another witty abbreviation GBPM which means ‘Gayi bhais paani me’. He mocked England skipper Eoin Morgan who won all the tosses in three-match T20I series. He compared the coin used for toss to the coin in Bollywood classic ‘Sholay’ which was tampered by character ‘Jai’ played by Amitabh Bachchan.

He blamed KL Rahul for getting skipper Kohli runout in the final. He thanked Yuvraj Singh for his ‘choke chakke ki barsaat’ as well against Chris Jordan. He confessed his love for Man of the match Yuzvendra Chahal who picked up 6 wickets in the final. According to #ViruGyaan ‘ye ladka (Chahal) lamba chalega’.

He mocked the English players once again for their forgettable tour of India, failing to beat the hosts in all formats. He ended his show with another pun, “Yaha khatam hua aaj ka #virugyaan, aap khao butter naan”.