The ‘Master Blaster’ Sachin Tendulkar turns a year older today. Every year fans come up with unique ways to celebrate the cricketing Lord’s birthday. And among such die-hard fans is Mumbai’s Abhishek Satam, whose idealism reaches a whole new level with every passing Tendulkar birthday.

Cricket in India is a religion and Sachin is it’s most worshipable God. On the occasion of the legend’s 44th birthday, Satam, 29, along with his friend Sandeep Bobabde has made a 44-feet long rangoli at R.M. Bhatt High School.

Satam, owns a huge collection of Sachin Tendulkar’s newspaper clippings. He has been collecting these cut-outs for the past 16 years. “When I used to see him bat, it was nothing less than heavenly. I’m upset that we don’t get to see it anymore. But that doesn’t change the fact that Sachin is my hero, my God. And to show my respect to my God, I do something special on his birthday every year,” said Satam.

The rangoli took 20 hours to complete. The visuals have Sachin’s picture holding a World Cup and a Bharat Ratna. There is a Marathi poem glorifying Sachin Tendulkar written underneath this. “Last year, I made a sand art for Sachin. This year I gave a more Indic touch with rangoli. I hope to meet Sachin personally some day and gift him a picture of his I clicked at an event many years back,” Satam added. 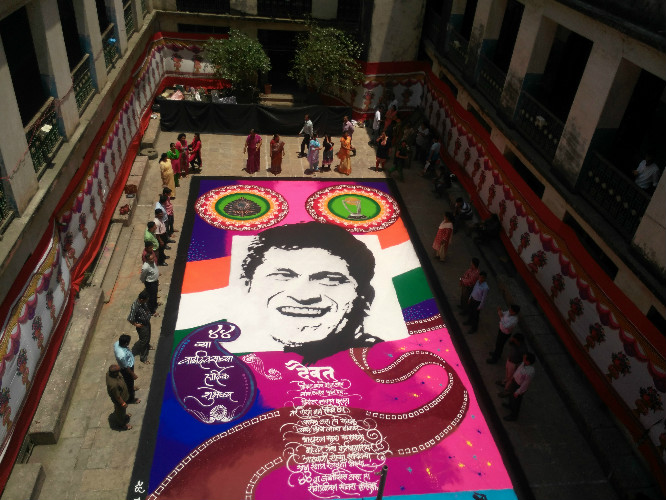 Abhishek Satam plans to start a Sachin Tendulkar exclusive art exhibition, inaugurated by none other than the man himself.

Tendulkar thanked his fans early this morning and announced on Twitter that he would interact with his fans on the 100MB app where he will discuss his personal life, about how he plans to celebrate his day and his upcoming biopic Sachin – A Million Dreams which releases on May 26.