Virat Kohli said after Test triumph against New Zealand that he learnt a lot from his former Test captain Virat Kohli. He was referring to his skills as a captain. But, it is not the only thing Virat Kohli learnt from him. He also aped him while playing in the middle. Watch the video if you haven’t watched already.

Virat Kohli played MS Dhoni’s signature shot and he played it to perfection. Kohli hit Dhoni’s trademark Helicopter shot. He played to such a precision that the ball went out of the park. And he did it in front of MS Dhoni’s loyalists- Ranchi crowd. Kohli thoroughly enjoyed the shot. Ranchi crowd loved it. We loved it. 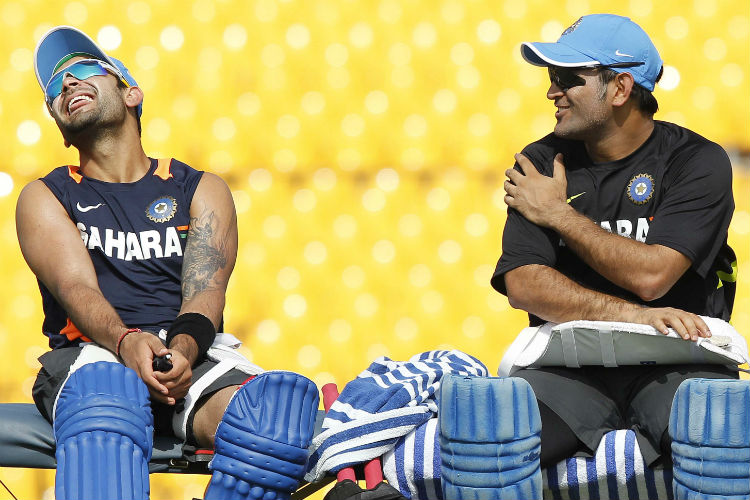 Dhoni was not playing the match. Virat Kohli was at his devastating best. He was middling the ball well. Sri Lanka had already lost 4 straight ODIs. Sri Lanka had posted a challenging total of 286. Kohli had come when India was 2 down for 14 runs. But the pressure couldn’t get the best of him. He started hitting the ball all around the park. He was so confident about his ability to hit the ball that he attempted what nobody other than Dhoni has done. Kohli went on to score 139 runs not out. India won the match by 3 wickets.

India are playing in Ranchi again on Wednesday. They are leading New Zealand 2-1. A win here will seal the series in India’s favour. Ranchi’s very own MS Dhoni is also playing this time. Dhoni has scored 80 runs in the 3rd ODI. But, he couldn’t finish the match. Virat Kohli scored an exquisite 154 not out. He saw the team home. India won the match by 7 wickets.  The 151-run partnership made the win possible.

As India play New Zealand in Ranchi, it would be expected of them to repeat the performance. It would be interesting to know whether Virat Kohli will attempt the helicopter shot in Ranchi.