Mahendra Singh Dhoni is all set to break his own world record when he will walk out to bat in the first India vs Sri Lanka ODI in Dambulla. He already had numerous world records in his name as a wicketkeeper, batsman, captain but the one he would break on August 20 is probably the unique one. As per the final playing XI announced for the first ODI, MS Dhoni is expected to bat at number 5. If he comes to bat and remains unbeaten till the inning ends, he will become the only batsman to have remained not out for the most number of times in international cricket.

Till now Dhoni has remained not out for 119 times in international cricket which the second highest after Sri Lanka’s legendary spinner Muttiah Muralitharan. The highest wicket-taker in Tests, Muralitharan has 56, 63 and 2, not outs in Tests, ODIs and T20Is and tops the list. On the other hand, Dhoni has 16, 70 and 33 number of not outs in Tests, ODIs and T20Is respectively. Though he has equalled Muralitharan’s record already, he is expected to reach the No.1 position soon. 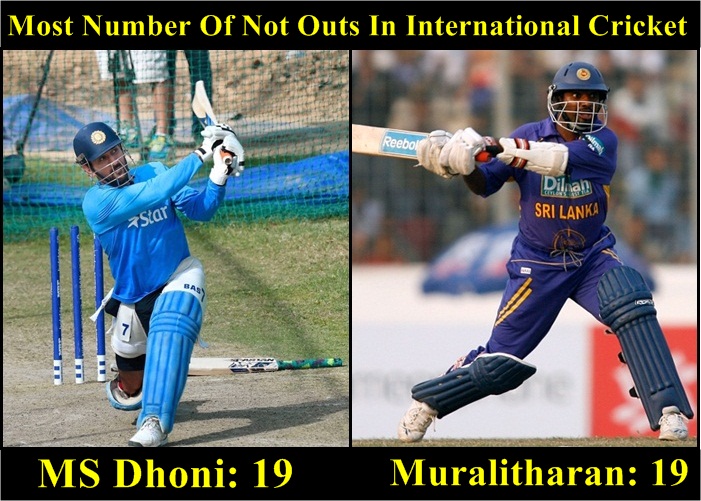 MS Dhoni all set to break his own world record

In this amazing record list, the players who fall after MS Dhoni are Shaun Pollock (113 times, retired), Chaminda Vaas (108 times, retired) and Steve Waugh (104 times, retired). Surprisingly, Dhoni is the only batsman in this lot who is active and still plays for his country in shorter formats.

Earlier today, the first India vs Sri Lanka ODI commenced at Dambulla where Indian skipper Virat Kohli continued his streak to win the toss in Sri Lanka. India opted to bowl first and invited the Sri Lankan team to bat. This series will be crucial for the home team as Upul Tharanga & Co. has to win at least two games in the series for getting directly qualified for the World Cup 2019. The cut-off date for direct qualification is September 30.