Manan Vohra surprised everyone in the cricketing world with his gritty knock against Sunrisers Hyderabad (SRH). Vohra will realise today that he played one of the most memorable innings of Indian Premier League (IPL) irrespective of ending up on the losing side. It was surely and inning of substance for the young lad as he pulled off a near-impossible win against SRH.

You all know that Vohra scored 95 from 50 balls and got out to Bhuvneshwar in the 19th over as SRH won the nail-biter by 5 runs, but only a few know the way Vohra built his inning from scratch despite running out of partners all through his inning.

The pressure on Vohra started building from the first ball as he lost his dependable opening partner Hashim Amla. Then came skipper Glenn Maxwell who had an intent to soak up the pressure and turn the game into his favour. But, he forgot one thing, this pitch was not the flat track he reckoned it to be. Had it been like that, David Warner would have carried his bat into the pavilion with a century alongside his name instead of 70.

Maxwell showed promise initially but even he knew that the pitch and conditions were too good to slog the ball from very first ball. He eventually got out and added to the pressure Vohra was feeling on the non-striker end.

The Afghan-duo, Rashid Khan and Mohammad Nabi took KXIP batting lineup by a storm. After Nabi providing the initial breakthrough it was Rashid’s turn, he got the wicket of last overseas player David Miller followed by Indian wicketkeeper-batsman Wriddhiman Saha. With Axar Patel on the other side and half of the player back in the pavilion before within 10 overs, it looked all but over for KXIP with required rate climbing up and boundaries hard to come by.

Axar Patel gave in too

Axar was in good form in the previous matches. Everyone reckoned that this wicket partnership is the only hope for KXIP. Vohra succumbing to the pressure let off a few boundaries and inspired Axar to do so as well. Axar, in order to attack Moises Henriques, went for the slog and gave his wicket away. SRH players were enjoying as they felt they had won the match with the last batting pair back in the hut but they were about to be proven wrong.

Vohra became fed up of playing the waiting game, he knew he had to attack now in order to stay in the game and that’s exactly what he did. Vohra was knocking the ball around and attacking the loose deliveries. He made Nabi his first target hitting two boundaries in his over. Vohra was shifting the momentum to his side slowly. Mohit Sharma on the other end too was giving him strike and scoring an odd boundary.

Vohra got to his fifty in 15th over and that too from 35 balls. He hit a six off Barinder Sran and that’s when the whole game changed. A flurry of boundaries meant Vohra-Mohit got 20 runs from Sran’s over but it was about to get better.

Warner introduced Rashid back into the attack thinking he might give them a breakthrough but what happened was exactly the opposite of that. He struck two sixes and two fours in that over scoring 21 runs off it, he had taken on their star bowler of the season. By the end of that over, SRH were officially back in the game and it was clearly visible on Warner’s face.

No bowler seemed to work out for Warner and that’s when he introduced his trump card, Bhuvnehswar. He got the breakthrough straight away as Mohit walked back into the pavilion. He almost got the wicket after getting hit for a boundary from Vohra but Shikhar Dhawan could not hold onto the catch at deep covers. Everyone was agitated as it seemed like Dhawan has dropped the game.

In the next over it was all upto Bhuvneshwar as KXIP needed just 16 runs from 12 balls. He got the wicket of Cariappa on first ball who decided to get too ambitious. Ishant Sharma game Vohra the strike but Bhuvneshwar bowled a yorker which turned out to be too good for Vohra.

The excitement ended on that note only as Vohra’s spell bounding inning came to an end. He had scored 45 from 15 balls after reaching to his half century. It will be an apt description to say that Vohra changed the single-handedly and deserved to carry his bat to the pavilion with a smiling face, not in disappointment.

Even Yuvraj Singh showed respect to the fighting knock and patted Vohra on his back for an unforgettable inning which the 23-year-old will cherish forever. 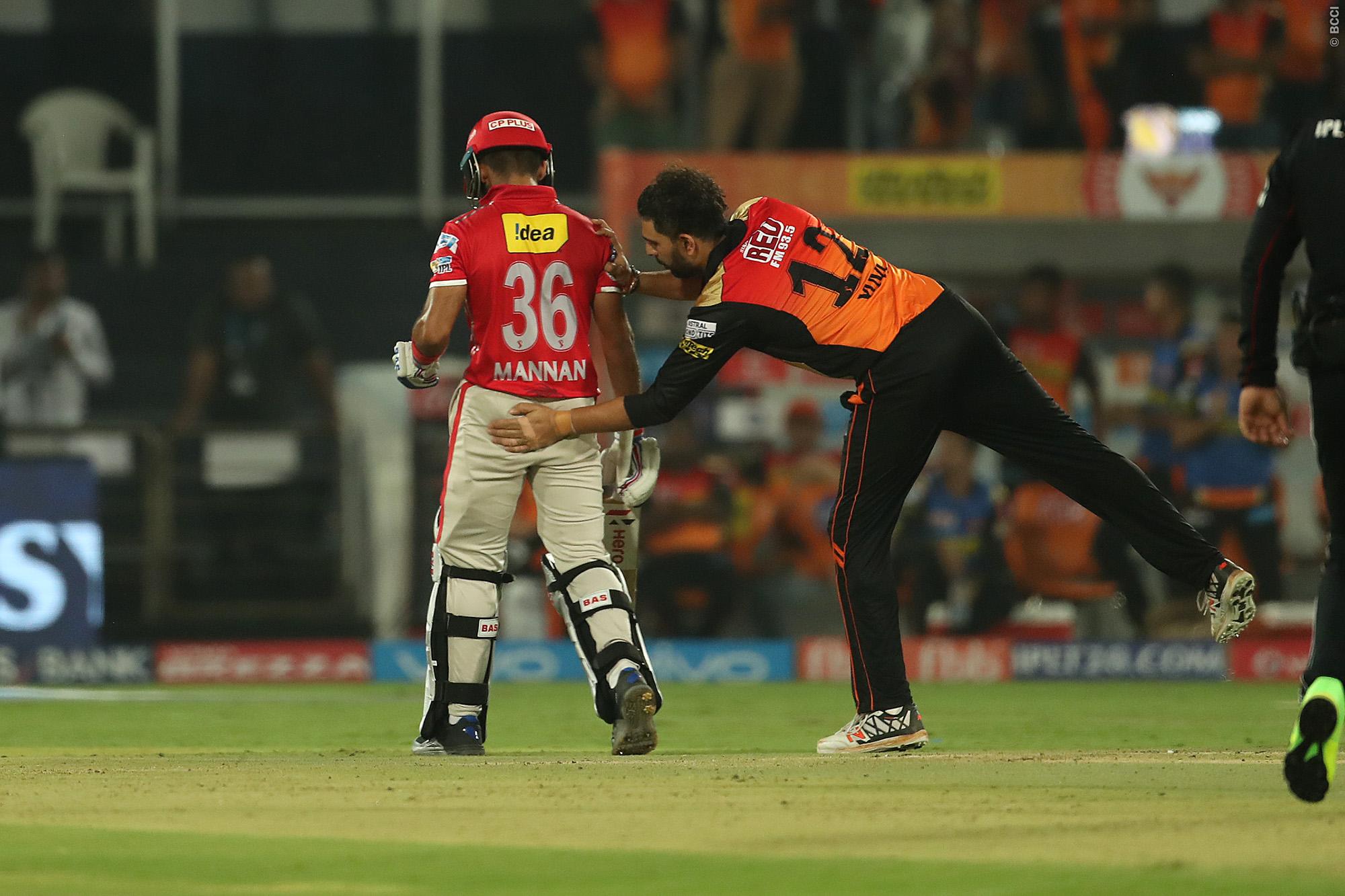 Here is the pick of tweets that you must read, appreciating Vohra.

Manan Vohra has played a knock to remember. On a pitch where some of the finest batsmen struggled to put bat to ball. Well played #IPL

Wow! Manan Vohra has opened this match up after all of us had thought it was over. This is breathtaking batting.

First match today was a thriller. If Mana Vohra bats through, the second could be too!

Vohra scored 7.3 times the 2nd highest scorer in the inns!!

#SRH may hav won d match!
But u won millions of hearts champ@ImMananVohra
Tats Manan Vohra for u…
95(50) 9-4s & 5-6s #SRHvsKXIP pic.twitter.com/YGgHZ1BZq7

gr8 innings by Vohra. Match is won by SRH but hearts goes with Manan Vohra. Brilliant knock by him. Vohra

The ratio difference between Vohra’s 95 & KXIP’s next top score of 13 of 7.30 is the second highest ever in an IPL innings. #IPL

SRH won the game by 5 runs, it was pretty disheartening to see that Vohra did not get the ‘Man of the Match’ award but Bhuvneshwar too deserved it equally for his 5 for 19 from 4 overs.