India’s batting legend Sachin Tendulkar countered the highest wicket-taking spinners in Test cricket and T20 cricket. Tendulkar made legendary Australian spinner Shane Warne look like an ordinary spinner and when he praises a spinner it is the best compliment one could get. Afghan leg-spinner Rashid Khan currently playing for Sunrisers Hyderabad bowled a game-changing spell against Kolkata Knight Riders (KKR) in Indian Premier League (IPL) 2018 qualifier 2.

Rashid took 3 wickets in his quota of 4 overs and gave just 19 runs. Before that he ensured that SRH post a fighting total on the scoreboard in the first innings at Eden Gardens, Kolkata. He played a match-winning cameo scoring 34 runs off just 10 deliveries including 2 fours and 4 sixes.

Rashid’s impact on ‘Master Blaster’ was such that he declared him as the ‘best spinner’ of T20 format. Here’s what he tweeted –

Always felt @rashidkhan_19 was a good spinner but now I wouldn’t hesitate in saying he is the best spinner in the world in this format. Mind you, he’s got some batting skills as well. Great guy.

While SRH fast bowlers took a beating, Rashid pumped the brakes on the scoring rate. He got the wicket of Robin Uthappa followed by Chris Lynn who fell short of his half-century by two runs. Then, he got rid of the ‘Danger man’ Andre Russell who has been given the role of a finisher in KKR and tailor-made for situations like these. 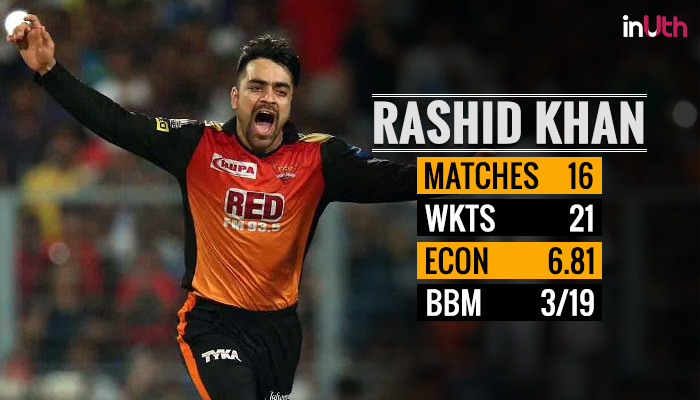 Rashid is also the contender to get the purple cap. He has taken 21 wickets from 16 games and is only behind Andrew Tye (24 wickets). His economy rate of 6.78 runs per over has been outstanding. The Afghan leggie will also play in Afghanistan’s first ever Test match against India. It will be interesting to see whether he is able to impress in the longest format of the game or not.