After a continuous streak of poor performance in the ongoing season of the Indian Premier League (IPL) 10, the Virat Kohli-led Royal Challengers Bangalore showcased few improvements in the bowling department against Kings XI Punjab in the game number 43. After losing the toss, Glenn Maxwell & Co. had to bat first and they lost their first wicket in the first over itself. Hashim Amla was dismissed by Aniket Chaudhary for 1 run. By the end of the powerplay, Punjab lost their 3 in-form batsmen while the Bangalore bowlers didn’t allow them to score even 40 runs.

It was a good comeback from Bangalore where the bowlers had put a lot of pressure on the Punjab batsmen. But, there was an incident which caught everyone’s eyes. Despite good efforts, wicketkeeper Kedar Jadhav’s act of missing a chance of stumping turned out to be a shocking moment.

It was the 10th over when Punjab’s score was 54/3 and Yuzvendra Chahal was delivering a superb spell while Wriddhiman Saha had the strike. In the third, Saha stepped out of the crease so that he could hit a biggie but he missed the ball. The ball went directly to the Kedar Jadhav but he too fumbled at that moment and the ball was dropped near the stump. 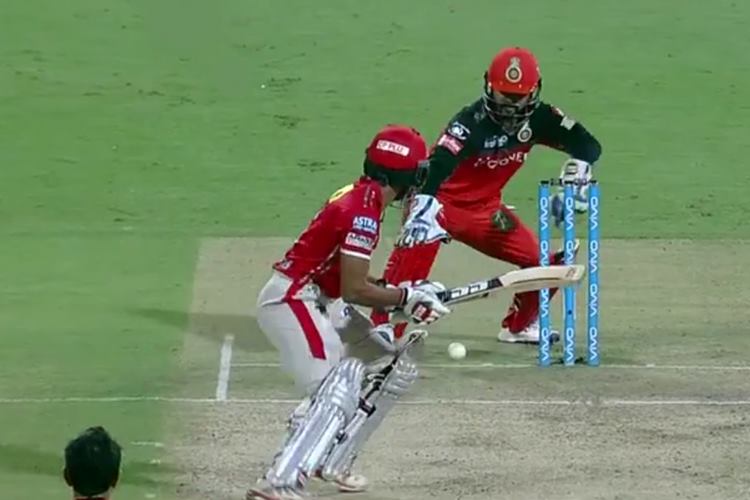 While Saha was much far from the crease, Jadhav had enough time to recollect the ball, hit the stumps and dismiss Wriddhiman Saha. But, unfortunately, Jadhav failed to do so and gave a lifeline to Saha who was then playing for 1 run. Meanwhile, commentator Danny Morrison said,” Are you kidding me? He had so much of time that he would have sat down there, had the kettle open and after having a cup of tea, he had hit the stumps.”

After getting that lifeline, Wriddhiman Saha scored 20 more runs in the next 23 balls and played till the 18th over and then finally dismissed by Shane Watson in 17.2 overs.

Punjab, despite struggling batting performance, managed to score 138 runs in 20 overs after losing 7 wickets where Axar Patel turned out to be the top scorer who played a knock of 38 runs off 17 balls and hit 2 sixes and 3 fours.