Jaydev Unadkat, was the key men to watch out for before Indian Premier League Final got underway. Mumbai Indians won the toss and surprisingly opted to bat first, thinking of the scoreboard pressure of a final, justified. Rising Pune Supergiant started with the in-form Jaydev Unadkat and Washington Sundar, the two guys who are in good form. They managed to keep things tight, and success came calling. But it took a magnificent effort from the left handed medium pacer. It was the third over, the ball was angle away from Lendl Simmons, who closed the face of the bat early and that led to getting a leading edge.

But knowing the natural delivery stride of a left handed bowler, he had to evade the pitch and then to change body angles and to dive towards his wrong side and then scuff the catch inches off the ground. But what was also commendable was the way he did not allow the ball to pop out of the hand once he landed on his elbow. It was a moment of genius from the fast bowler, who has surely come of age this season. He is already the second highest wicket-taker this season just behind Bhuvneshwar Kumar of Sunrisers Hyderabad with 26 wickets. 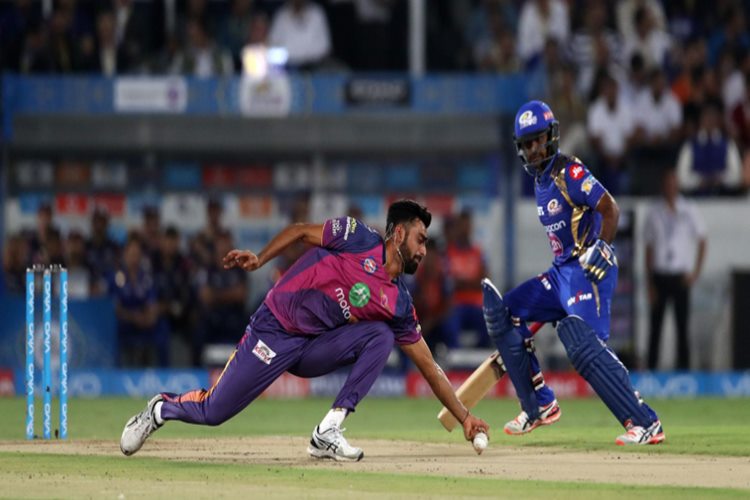 Unadkat by scalping Simmons early on, pegged them back straightaway in the match. As we speak, we come to know that Mumbai Indians have landed in a more serious situation as they have lost Parthiv Patel as well. Rohit Sharma and Ambati Rayadu are trying to resurrect the sinking ship and get a formidable score, deserving of a final.