After 45 days of league phases and 56 power-packed T20 games, finally, the tenth season of Indian Premier League (IPL) has entered into its qualifier phase. The first playoff is going to be played between Mumbai Indians (MI) and Rising Pune Supergiant (RPS) at the Wankhede Stadium on May 16. The winner of this face-off will directly enter into the finals which will be played on May 21 in Hyderabad. While the loser of this game will get another game to play, known as the Eliminator, with the winner of the qualifier 2.

Meanwhile, InUthdotcom conducted an online poll on the social media where we asked our followers to vote for the team which, they think, would win today’s game.

The audience’s poll was live for almost two hours and thirty minutes to which approximately 9.3k cricket fans reacted. After the poll stopped, the results were in favour of RPS. 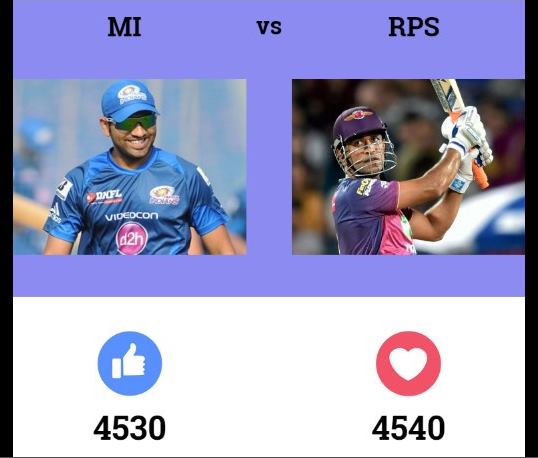 The results itself show that how exciting the game is going to be. Though the fans have supported the RPS side with stars like Ajinkya Rahane, MS Dhoni, Steven Smith, Dan Christian etc. but the margin with which Pune swept this polling is very narrow!

Earlier in this tournament, there have two RPS vs MI clashes and both have been won by Pune. But today’s game is going to fix the fate of the teams that who will enter the grand finale.

The second qualifier will be played between Kolkata Knight Risers and Sunrisers Hyderabad at Chinnaswamy Stadium in Bengaluru.