It was a do-or-die game for the Kolkata Knight Riders (KKR) in the Qualifiers 2 against the Mumbai Indians (MI) and once again, Kolkata’s Lucky charm and every Indian’s heart-throb was present at the M Chinnaswamy Stadium in Bangalore. Just like the previous game, he was spotted among the crowd with his near ones and undoubtedly, it was Shah Rukh Khan.

King Khan was standing at the gallery sporting a pitch black shirt with its signatory KKR logo. But the actor was spotted a bit tensed today as his team had some back to back quick wicket falls right in the beginning. Though Rohit Sharma & Co. were successfully putting the pressure on the Kolkata side but it seemed like the same weight was putting heavy on SRK’s face, as well. 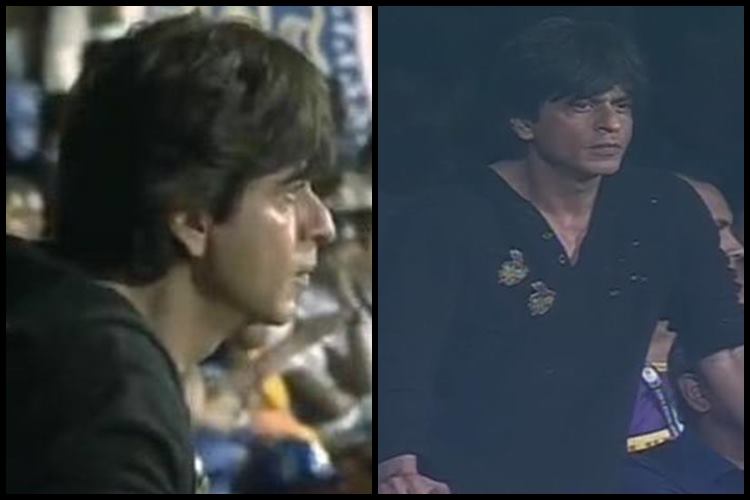 [Tagless] Small : SRK from Bengaluru Stadium, Can’t see him like this pic.twitter.com/rGfHWQF2qS

KKR had to bat first as earlier today, MI Skipper Rohit Sharma won the toss and elected to field first. The Mumbai bowlers delivered some terrific spells and Kolkata lost its 5 batsmen within 31 runs. Later, Surya Kumar Yadav tried to add more runs to the board but he lacked a constant support at the other end and finally, KKR ended up scoring just 107 runs after getting all out.

On May 17, Shah Rukh was also present at the Chinnaswamy Stadium in Bangalore when Kolkata played Sunrisers Hyderabad (SRH) in eliminators and after the rain affecting the game midway, Kolkata won the game by 7 wickets.

Later on May 18, Shah Rukh took to his twitter account and expressed his happiness on the micro-blogging site. He wrote,”Glad on the winning side tonite. But playoffs need to have an extra day in case of an abandoned match. Ami KKR onwards with @GautamGambhir.”

Glad on the winning side tonite. But play offs need to have an extra day in case of an abandoned match. Ami KKR onwards with @GautamGambhir