Gautam Gambhir is a kind of captain who knows how to bully the opponent player over his weakness and the Kolkata captain does it every time when MS Dhoni comes to bat. The way Gambhir deploy his fielders around Mahendra Singh Dhoni is funny though but enough to put him in a lot of pressure. It’s a unique way to set the fielders which wouldn’t allow the batsman play his shots comfortably. The fielders are present at both off and leg side slip at short-leg as well as t short-leg, extra cover and silly point. The batsman gets surmounted by a semi-circular arrangement of fielders making it difficult for him to play a spinner freely.

In the game number 30 of the Indian Premier League (IPL) 10 between Kolkata Knight Riders and Rising Pune Supergiant, such type of field arrangement was seen yet another time when MS Dhoni came into bat at number 4. The RPS side was reduced to 112/2 when Dhoni came in while Narine was the bowler. Before Dhoni could play the first ball, three fielders – including Gautam Gambhir – cordoned him off. 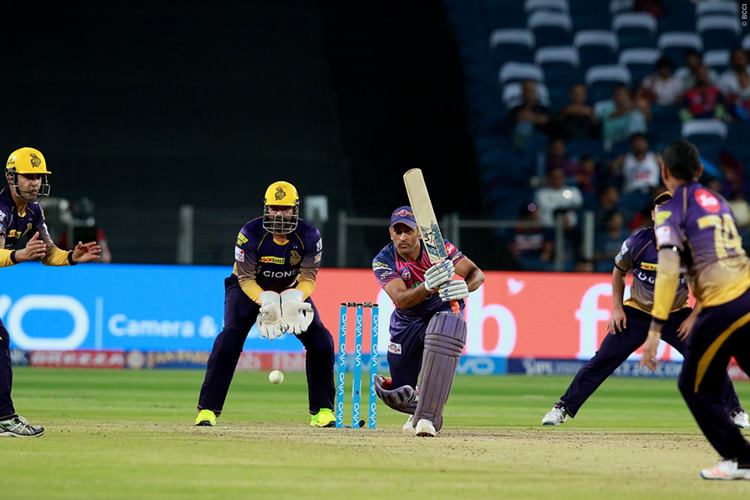 Well, this practice may annoy the coolest player of all times but it shouldn’t be forgotten that what MS Dhoni is known for. In the very next over, Piyush Chawla came into bowl and amid such field set-up, Dhoni hit him for a humungous six and so he did again in the very next over to Kuldeep Yadav.

This was not the first time that Gambhir did this to Dhoni in order to stop Dhoni right from the beginning. In the previous seasons of the IPL, Gambhir had done the same things for numerous times.

Not only in IPLs but in a match between Delhi and Jharkhand in the Vijay Hazare Trophy, something similar was seen again.

Well, it doesn’t seem that this Dhoni-Gambhir equation is going to end so soon. Moreover, the fans didn’t want that to happen though!