Virat Kohli has has a forgetful Indian Premier League 2017, RCB have been stuck right at the bottom of the league table, but it seems that has by no means hurt his stokes as he is at numero uno in the IPL Twitter XI. Now, that we have reached the playoffs stage of the league we can asses who topped the Twitter and was most popular among all the players from across the globe.

Aneesh Madani, the Head of Sports Partnership, India and South East Asia, Twitter said, “From the action on the field to the special player Twitter emojis, cricket fans had plenty to cheer about on Twitter during this IPL season. The Twitter Dream XI is a collection of the most mentioned players during the season. India’s biggest cricket superstars make up a majority of the list with Virat Kohli topping the charts despite a disappointing season. Ben Stokes truly captured the imagination of fans on Twitter as the only overseas player to make the list. Much more to look forward to in the Playoffs.” 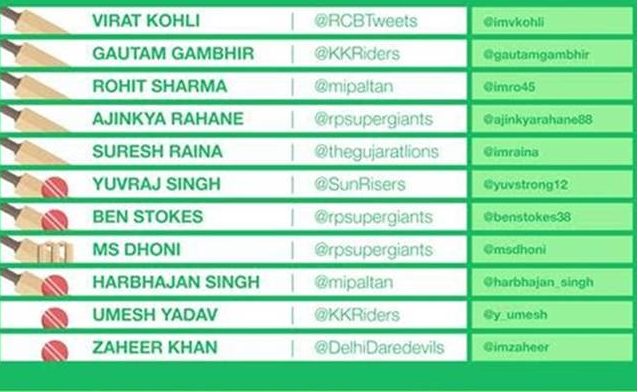 KKR captain finished close second to Virat, who had a decent run at the league, Gautam Gambhir is at least among the top five run-getters in the league. Others in the list are, Ajinkya Rahane, who has not had the best of tournaments going by his standards. Mumbai Indians captain also features in the list, Rohit Sharma along with Gujarat Lions captain Suresh Raina, who could have had a much better tournament. It is questionable the ratings, but that is how it stands.