The Indian Premier League (IPL) 10 is underway and till now the fans have witnessed numerous superb moments whether be it through bat, ball or fielding. There have been some phenomenal performances which had increased the fan following of this cash-reach tournament. In this chain of events, Kiwi all-rounder Corey Anderson today proved his worth while playing against the Gujarat Lions at the Feroz Shah Kotla, Delhi.

In the match number 41 between Delhi Daredevils (GL) and Gujarat Lions (GL), Anderson took a stunning catch to dismiss Dinesh Karthik who was playing a fabulous knock and had already scored a half-century.

It was the first ball of the 15th over which was bowled by Patt Cummins and Dinesh Karthik had the strike who was playing at 65 off 33 balls. It was an overpitched delivery and Dinesh tried to hit it towards the mid-off inside but the ball got the undesired elevation and Anderson, who was standing inside the 30-yard circle, jumped in the air and took the catch in such a way that it seemed he plucked the ball from the air. Watch: Corey Anderson’s superb catch to dismiss Dinesh Karthik 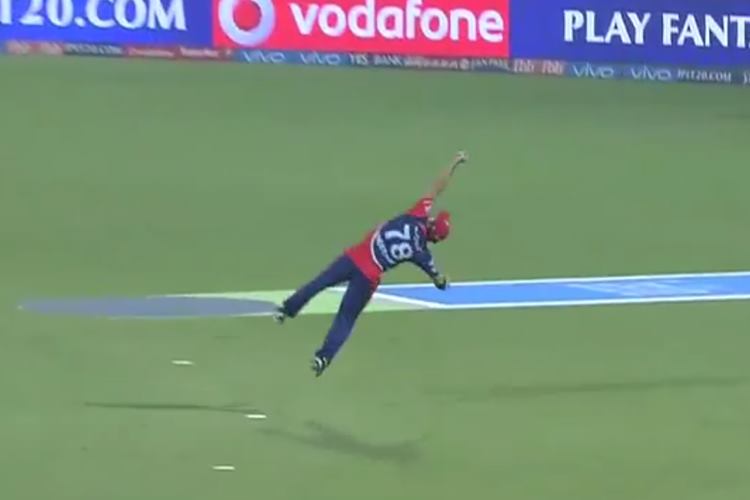 After that stunner, DK had to return to the pavilion after 65 off 34 balls and the Gujarat Lions were reduced to 158 for 4. Prior to Dinesh’s dismissal, Gujarat skipper Suresh Raina played a classic skipper’s knock of 77 runs off 43 balls after hitting 4 sixes and 5 fours. He came to bat at number three after a poor a start and provided the much-needed momentum.

By the end of 20 overs, the Gujarat Lions managed to put to a fighting score of 208 runs after losing 7 wickets.