Virat Kohli, a name which has been synonym with an excellent form for the past few years. Kohli scoring a hundred almost felt like a regular incident and experts had already started comparing him to the legendary Indian batsman, Sachin Tendulkar. But, every batsman in his career hits a rough patch and Kohli does not get a different treatment either.

From being the runner-ups of the previous Indian Premier League season, Royal Challengers Bangalore had a horrendous season as they finished last in the IPL 2017 Standings. Kohli scored 304 from 10 matches as he missed the first four due to the shoulder injury he suffered in Ranchi Test during Border-Gavaskar Trophy 2017.

Coming back to the shoulder injury, Kohli went through a dry spell in the Test series against Australia when his excellent form came to an abrupt halt. He could only score 46 in 6 innings which is his worst score in a Test series. He recovered from the poor form but not enough to change his team’s fate. The below statistics will give you an idea of skipper Kohli’s inconsistency in the series. Not enough support from RCB teammates

RCB had an injury-struck season this time around. KL Rahul’s absence was felt up the order as he missed out due to his surgery and then recovering from it. Rahul was the leading run-scorer in the previous tournament. Sarfraz Khan as well suffered an injury while playing in a practice match and was ruled out of the season straight away.

Apart from the injuries, their star players who have dominated the IPL scene over the years had a horrific tournament with inconsistency written all over their statistics. Chris Gayle scored just 200 runs in 9 games including a fifty in the last game. AB de Villiers aka Mr. 360 too could only score 216 runs in 9 games despite being the leading run score of the previous season.

Other overseas batsmen, Shane Watson, Travis Head too could not live upto the expectations which created immense pressure on RCB skipper and led to their lowest score in the history of IPL, 49. They did not just bundle out once but several times leaving the team high and dry. RCB’s batting has been their strong point over the years but this time around it has become their sole weakness.

A downfall in IPL after years

After the initial few years where he was picked from India’s Under-19 World Cup squad, into RCB’s side in the inaugural season, Kohli progressed and became an indispensable part of the team to leading it. One should emphasise on the fact that he holds the record for most runs in a season, 973. He also has a record for most centuries in the season, 4. But, this time around he could not even score 1/3rd of it. 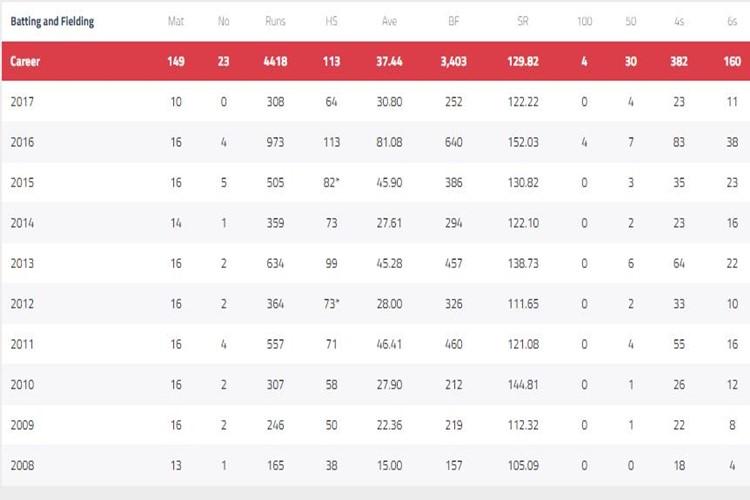 Well, the good news is Kohli is back in form just in time before ICC Champions Trophy 2017 after scoring a half-century in a dead rubber match against Delhi Daredevils (DD). The effortless six he struck over covers is still making rounds on the internet. India hope that Kohli fires when he faces Pakistan on June 4 and defend the Champions Trophy title.

Meanwhile, enjoy the ‘six of the season’, courtesy: Virat Kohli