India won the toss and elected to bat first and a good wicket at SSC, Colombo. KL Rahul was making a comeback to the squad in the whites. India did not get off to the ideal of starts as they lost Shikhar Dhawan, the centurion from the first Test departed early for a breezy 35 off 37 balls. That is when KL Rahul and Cheteshwar Pujara came together to stitch a partnership of 53 runs before Rahul was dismissed 57 and he would consider himself unlucky as he was fell prey to a run-out. He would be kicking himself for getting set and then giving it away. All of this did not bother Pujara the slightest as he kept batting and batting. Virat Kohli, again a centurion from the last Test did not get going, he fell trying to cut a ball close to his body for 13 runs.

Rahane joined Pujara when the score was 133/3 and then there was no looking back for the Indians. Pujara went on to bring up his 13th ton, in the process breaching 4000 Test runs. This happens to be Pujara’s 50th Test, hence all the more special.

Time for the final session as Pujara and Rahane walk out to the middle #TeamIndia #SLvIND pic.twitter.com/mHn00hQXVV

The Lankan bowlers bowled well but did not have luck on their side and that is what set them back. 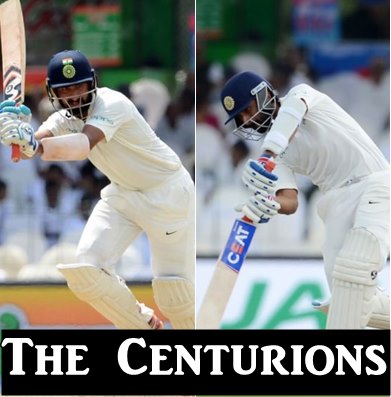 Ajinkya Rahane too brought up his 9th Test hundred in the process, well-timed as they say. His 100 came off 154 balls, which is pretty brisk according to Test match standards.

Finally! She said, after @ajinkyarahane88 gets to a well-made 9th Test century #TeamIndia #SLvIND pic.twitter.com/l1HlAM95x2