Great catch wins match! It is a popular saying. But, there is another very important thing a great catch does– make the game look attractive.

Cricket is a spectators’ game. And impossible catches are one of the most important things that make it good to watch.

This catch looked impossible to execute. But Henry took it to the amazement of the bowler Trent Boult.
Boult looked in disbelief.

Everyone watching this piece of brilliance from @Matthenry014 had the same expression as of @trent_boult @Paytm Test Cricket #INDvNZ pic.twitter.com/8CRLoMktaN 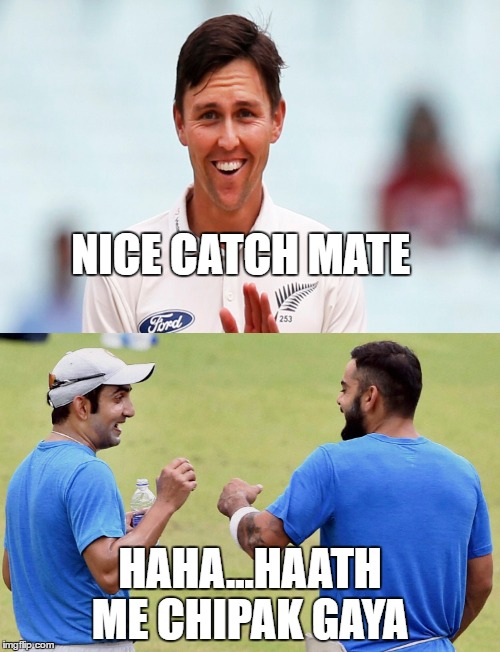 India were bowled out for 316 runs.

Indian seam duo of Bhuvneshwar Kumar and Mohammed Shami rattled the New Zealand top-order to leave them at a spot of bother at 85-4 when tea was taken early due to rain on day 2 of the second cricket Test here today.

New Zealand were still trailing by 231 runs when rain stopped play with 40 minutes to go for the scheduled tea break.

New Zealand stand-in skipper Ross Taylor (30) was at the crease after in-form Luke Ronchi just departed for 35 being adjudged lbw to Jadeja to a dubious decision.

Reduced to 23-3 shortly after lunch break when Kumar (2/20) castled Henry Nicholls, Taylor and Ronchi (35) put in their best effort to build a partnership but it did not last long with Jadeja cutting it short for 62 runs.