The iconic Delhi marathon that was scheduled to be held on November 19 has been cancelled with the officials citing unhealthy air conditions. Many runners from across the world come to the National Capital to be a part of the annual fitness extravaganza. The Delhi Marathon also sees an immense local interest as many citizens also take part in the event in their effort to stay fit.

Delhi faces a rise in toxic particulate matter every winter and the city is listed as one of the most polluted the world over. Before Diwali, the Supreme Court ordered a ban on the sale of firecrackers citing the dangerous levels of pollution that engulfs the city but the effectiveness of the ban is still debatable. The burning of stubble across the states of Punjab and Haryana also attribute to the rise in pollution levels in the National Capital.

The Indian Medical Association (IMA) earlier said in a statement,

High PM2.5 levels can increase blood pressure and increase the risk of acute cardiovascular events such as heart attack and stroke. Hence, we demand that the event be cancelled immediately and be organised at a later date when air quality gets better.

Reeti Sahai, a resident of Delhi, participated in seven editions of the Airtel Delhi Half Marathon and had been training for the eighth one. She said,

Just like me, many more have been training for months now and there’ll be participants from Ethiopia, Kenya and many Indian states. They should have thought about cancellation earlier, not at the last minute.

So here are 5 reasons why pollution is suicidal for runners:

If runners in Delhi are exposed to the highly polluted air, their lungs will be affected in the capacity to absorb oxygen. This will lead to a dip in oxygen levels in the blood which may either decrease the runners’ speed or, in adverse situations, lead to their collapse.

The toxicity in the air directly affects the lungs of the person and for runners, it is detrimental as it affects the delicate tissues which may lead to long-term health issues like ‘asthma’ and may inhibit the runners to participate in other marathons.

About 64,000 people die each year from pulmonary disease related to air pollution. Runners draw in a lot of toxic air because they are on the motion, hence they are more at risk of being affected. 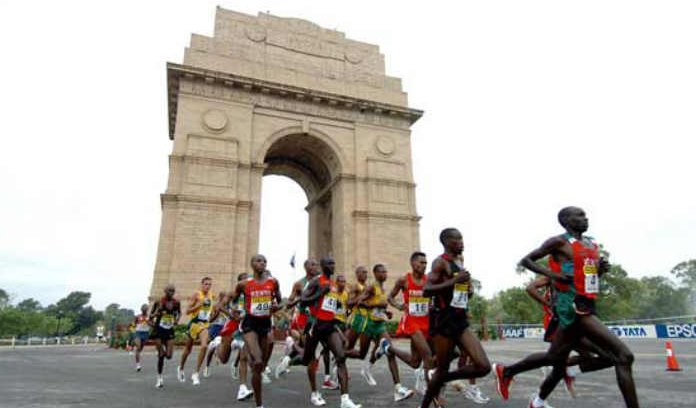 If you are a runner, running in polluted air may negate the positive impact the activity has on the body. According to the American Heart Association, air pollution can cause a number of cardiovascular issues and may disrupt the normal functioning of blood vessels.

Running in polluted air may lead to Lead Poisoning

Lead is a major pollutant and is a component of several noxious gases that emanate from factories. Lead is poisonous to humans and the substance can accumulate in the body over a period of time. Arsenic and mercury, which is a component of toxic fumes, can increase a person’s risk of getting cancer and nerve damage.

So if you live in a smoggy city like Delhi, better to run indoors or take out your running shoes only in the summers.