Olympic champion Abhinav Bindra was, for a change, not his laconic self as he fired a parting shot in which revealed his plan to earn a living out of business that deals with “fitness, medical and high-performance side of sports”.

Bindra, India’s lone individual Olympic gold medallist, on Sunday officially announced his retirement from shooting, saying, “It is time to move on and hand over the baton to the younger generation”.

After ruling the shooting range for more than a decade, Bindra, who will soon turn 34, has set his sights on his new business venture.

“I am trying to earn a living. I am involved in business, trying to earn a living, put food on the plate. Well, I am interested in sport but sport you know is not going to give me much money. I am involved in certain things, which is to do with fitness, doing something on the medical side, and I am also trying to do something on high-performance side of sports,” Bindra told reporters during an interaction on the sidelines of his farewell function.

“The role of sports science, sports medicine is incredibly important in modern day sport. We can’t do without it. I don’t think the whole concept is actually strong enough in our country,” the 10-metre air rifle ace added.

At the end of his illustrious career, Bindra was asked about his vision for Indian sports.
“I would like Indian sport to grow and I think that can be only possible if we are able to invest in grassroots and set up programmes and systems for people to come in and join sports. That requires investment, that requires expertise, it also requires a lot of patience, and it also requires will,” Bindra said.

He added, “Because when you start to invest in grassroots it’s not something you are going to get payback or returns immediately. You might get a return in 10 to 20 years, so you need to have that ability to persist. I think that is the only way we could develop as a country and we could at one point of time win double digit Olympic medals.”

Contrary to perception, the 2008 Beijing Olympics gold medallist seemed at ease with the fact that he has left competitive shooting.

“It’s easy. It’s actually nice because that’s the way I am, I like to struggle and I have to start from scratch. So it’s wonderful, I feel like a 13-year-old trying to learn how to shoot. But it’s good and that’s the way it should be.”

The National Rifle Association of India (NRAI), governing body for the sport of Shooting in the country, commemorated the glittering career of Bindra at a gala ceremony here. A first of its kind International Shooting Sport Federation (ISSF) Academy accredited Training Centre, was also launched on the occasion.

Bindra spoke of the importance of money in helping a country become a sporting powerhouse. “Of course, it requires a lot of money because it involves a lot of technology, lot of science that goes behind it, all that requires a huge amount of investment. You are not investing that amount of money on one individual, you have a whole system in place which does not necessarily put all the eggs in one basket.”

“You have a whole lot of people who you are working with and then hopefully you have a few coming up who are at that level. There are a lot of nations which invest in the grassroots and that requires a huge amount of investment,” he observed. 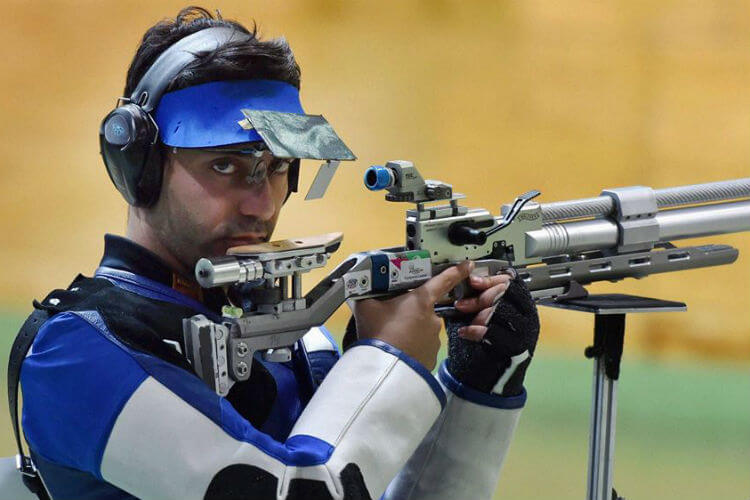 The World Championship gold medallist said there has been a mindset change among the Indians about sports, but the process has been slow.

“Sure there is but it is slow. Mindset is changing especially the young generations of today are much more aspirational and they follow the Olympic Games with a lot more enthusiasm than we have seen. It’s changing but it’s slow.”

“I think the real breakthrough will come when sport becomes a social activity, when a family chooses a sport over a movie on a Sunday afternoon and go and involve themselves in the sporting activity. Not for competition but to have fun, when that starts to happen that is the real breakthrough and I think we are far away from that.”

Speaking on the occasion, Raninder Singh, President, NRAI, said, “If any kid today comes up to me and says how to become a good shooter, all I would say is watch Abhinav train. The focus, the dedication, the professionalism that he brings to the sport is truly one to emulate.”

Bindra said, “Shooting has developed tremendously as a sport in India. The NRAI has scope to be not just the best sporting federation in India but also a model federation in the world. There has been unstinted support from the Government of India and Sports Authority of India. I have never thought of myself as the most talented.

“My talent lies in my hard work. My performance at Rio gave me closure. I did my best and could not have done any more. I have given my all to Shooting and have got back more than possible.”

“It is both a sad and happy day for the shooting family. Sad because we will not see Abhinav pick up a gun again to represent India and happy because perhaps this is just the beginning of an even greater professional career. Abhinav is in totality the true youth icon of this country.”