Lionel Messi is reportedly close to signing a contract extension with Barcelona, that will keep the Argentina captain at the iconic Camp Nou until 2022. Rumours started igniting when Leo’s father and agent, Jorge Messi arrived in Spain from his native land Argentina this week. The 29-year-old who has been with Barca since joining their academy – ‘La Masia’ back in 2001, currently has 18 months remaining on his deal, which runs till the summer of 2018. Messi presently earns approximately £365,000 per week.

Leo’s new deal talks was supposed to take place next year, but Jorge Messi’s presence in Catalonia means that the negotiations will happen as early as the upcoming Christmas. Allegedly, Barca is keen on getting things done as soon as possible, as Lionel Messi still seems to be high on their agenda. The Spanish outfit wants to make the Argentine maestro the best paid footballer on the planet once again. Rivals Real Madrid last month gifted their ace Cristiano Ronaldo a new £365,000-a-week five-year agreement, which saw the Portuguese skipper matching Messi’s contract.

Lionel is reportedly also keen on getting things done this year, having recently seen his teammate Neymar signing a £289,000-a-week four-year deal until 2021. The Catalan football club has enjoyed worldwide success ever since the MSN magic began showering in with goals in almost any to every game. So now the Barca chiefs are also planning to award Luis Suarez with a deal of his own in order to continue with the MSN bandwagon. 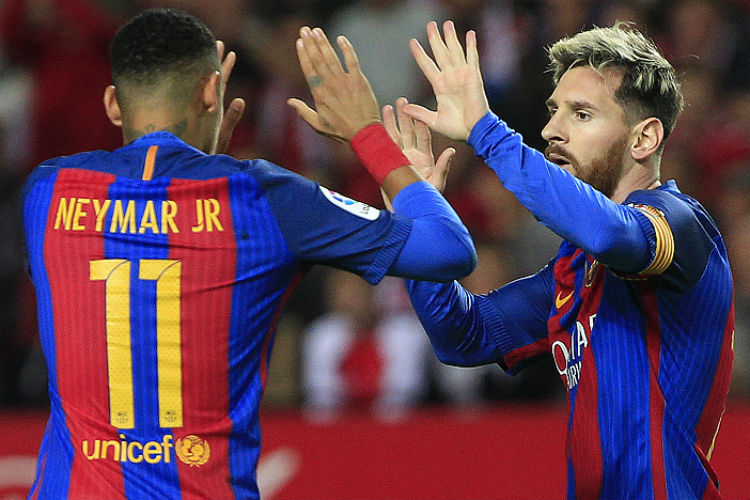 Barca have tied Neymar to a new deal and soon hope to seal a contract for Messi as well. (Photo: AP)