Bengaluru FC (BFC) have already registered themselves in the history books as the first Indian football club to reach the AFC Cup final. The Bengaluru-based outfit had managed to oust the defending champions Johor Darul Ta’zim 4-2 on the aggregate score on October 19, 2016. BFC led by Sunil Chhetri will lock horns with Iraq’s Air Force Club at the Suheim Bin Hamad Stadium in Doha, Qatar on November 5, 2016. Indian football fans will be glued to the television tomorrow while remaining hopeful of the Doha dream. 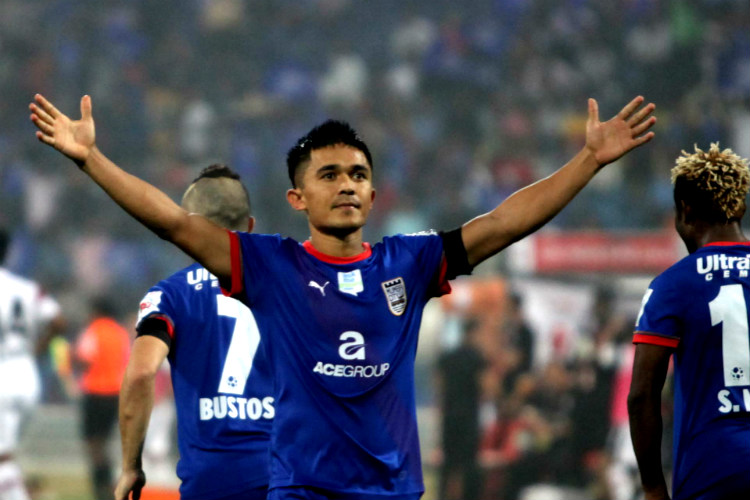 Bengaluru FC will rely on their captain Sunil Chhetri to oust their Iraqi counterparts. (Photo: Express)

The football club which was established in 2013 understands that it will be an uphill task to claim the prestigious title against the Iraqi outfit. As Pele had once said, “More difficult the victory, greater is the happiness in winning.” The encounter will be a challenge like never before, one that will make or break Indian football at least for the foreseeable future.

Bengaluru FC is reputed for having a substantial fanbase in India. Their supporters are officially known as the ‘West Block Blues’. Meanwhile, the players and staff equally acknowledge the fans for their undeniable support calling them the ’12th man’ on the side. The Indian footballers must sport a calm demeanour and patiently approach the match if they are to etch their names in the record books and create Indian football history.

We happened to catch a glimpse of something that’s brought out the best in us for a year now. #TheDohaDream #ForTheWin #AFCCupFinal pic.twitter.com/53Hl4w4PFY

BFC coach Albert Roca will become an instant legend if he manages to formulate a success plan tomorrow. The Bengaluru outfit is known to play beautiful football with an array of passing and crossing display. But Bengaluru FC will also have to act according to the situations by playing possession and counter-attacking football. No Indian football club has ever made it to the final of the AFC Cup, in such a scenario, winning the championship should be of utmost priority.