Bollywood’s affection towards biopics on sportspersons is not new. Be it Milkha Singh, Mary Kom, Mohammad Azharuddin and Mahendra Singh Dhoni, stories about sportspersons have been told on the silver screen.  India’s flamboyant batsman Yuvraj Singh does deserve a biopic. Isn’t it?

A veteran of 40 Tests and 293 one-day internationals, Yuvi’s life story is similar to a Bollywood flick. Be it a phenomenal all-round performance in the 2011 ICC World Cup or recovering from cancer, the 34-year-old batter is an inspiration to many. Recently on a talk show when Yuvi was asked as to which actor he would like to play him, he promptly replied. And it’s none other than Akshay Kumar. 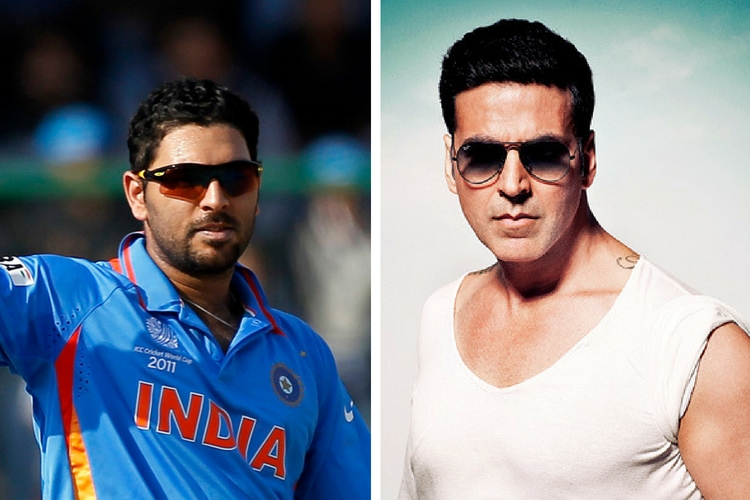 Yuvraj Singh wants Akshay Kumar to play him in his biopic.

Well, Yuvi made his choice very clear. But what about other sporting icons? Let’s say if biopics were made on these players, who would play them? Here are some possible choices.

1. Ayushmann Khurana as Virat Kohli: Indian Test skipper Virat Kohli’s rise to stardom is no less than a fairytale. Having lost his father at a young age, the Delhi lad worked hard to make it to the Indian team. A prolific scorer in all formats of the game, Kohli is also known for his aggressive attitude on the field. And there is no better actor than Vicky Donor actor Ayushmann Khurana to play him. A winner of Roadies’ second season, Khurana’s muscular physique and athleticism makes him the perfect choice to play Kohli. And guess what! He showed his batting skills in Vicky Donor itself. All he needs to do is hone his skills. Don’t they look similar together?

2. Prosenjit Chatterjee as Sourav Ganguly: When it comes to biopics on cricketers, how can you forget Sourav Ganguly? A flamboyant batsman and aggressive skipper who changed the way Indians play cricket. Be it waving his shirt at Lord’s or making Steve Waugh wait for toss, the incidents in Dada’s life are amusing and will make a great film. Renowned Bengali film actor Prosenjit Chatterjee, who was also seen in films like Traffic and Shanghai, seems to be the best bet for playing the former skipper. 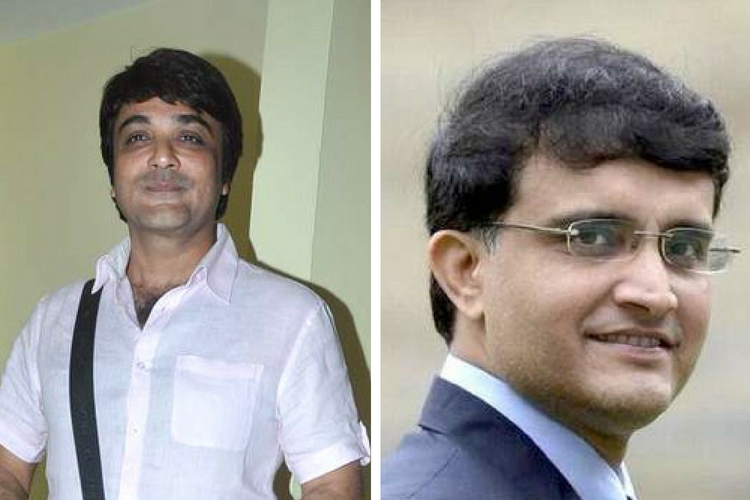 3. Randeep Hooda as Vijender Singh: Beijing Olympics bronze medal-winning boxer Vijender Singh needs no introduction. The 31-year-old pugilist’s life has been full of struggles. Son of a Haryana Roadways bus driver, Vijender had to toil hard to make it big to the international stage. A film should be made on his life journey. And the one name which comes in my mind is Randeep Hooda. Not just because he hails from Haryana as Vijender, but the actor has starred in biopics in recent times, prominently Sarbjit which won him a lot of accolades. Add to this, Hooda looks as rough and tough as the boxer himself. 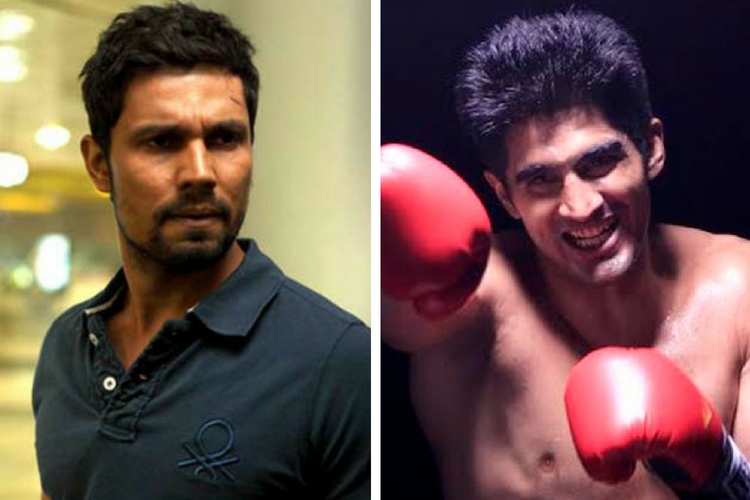 4. Parineeti Chopra as Sania Mirza: Currently ranked No 1, Sania Mirza has brought laurels to the country through her spellbinding performances on the tennis court. The 30-year-old Hyderabadi has eight WTA titles to her credit. The Padma Bhushan awardee has inspired many women who want to break stereotypes and achieve success. In this case, the best choice is none other than bubbly girl Parineeti Chopra. The Kill Dil actor possesses a similar physique like Sania. Co-incidentally, the 28-year-old actor played a Hyderabadi girl in 2014 flick Daawat-e-Ishq. So, it’s like half job done for Parineeti. Plus, both Sania and Parineeti shared a wonderful friendship which was seen at the wedding of the tennis player’s sister. Picture this.

Cause we have soooo much to say to each other alllll time @ParineetiChopra #manymanymoods pic.twitter.com/JkA2RUhSM8

5. Deepika Padukone as Saina Nehwal: Besides being the daughter of a renowned badminton champion, dimpled lass Deepika Padukone is also a accomplished shuttler. So, how nice it would to see her essay the role of badminton star Saina Nehwal. The Bajirao Mastani actor had herself revealed her wish to portray Saina. Although Amol Gupte is directing a film on the London Olympics medallist and the cast has not been finalised yet, we would be happy to see Deepika serve aces on the silver screen. 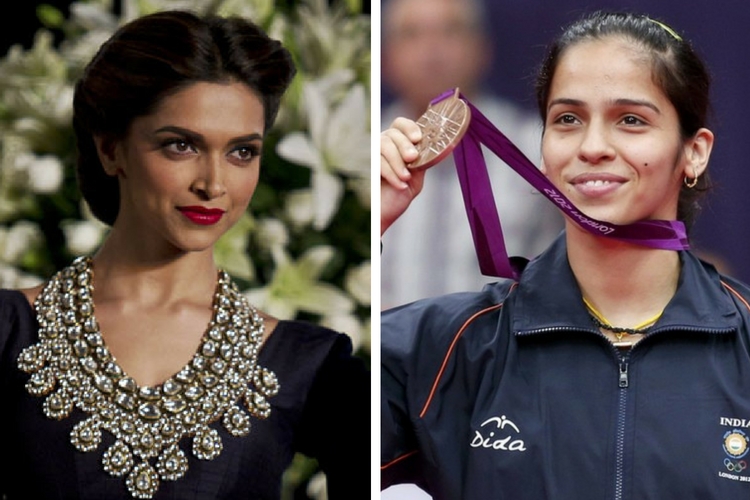 Deepika Padukone had expressed the wish to portray Saina Nehwal.

6. Ranbir Kapoor as Abhinav Bindra: India’s first individual Olympic gold medallist Abhinav Bindra is a renowned sportsperson. The Arjuna Award winner has won several medals for the country at various events. After losing an Olympic medal at the 2016 Rio Games by a whisker, he announced his retirement. But his rise to stardom is indeed an inspirational tale for all. Ranbir with his suave look seems to be the best bet to play the ace shooter. 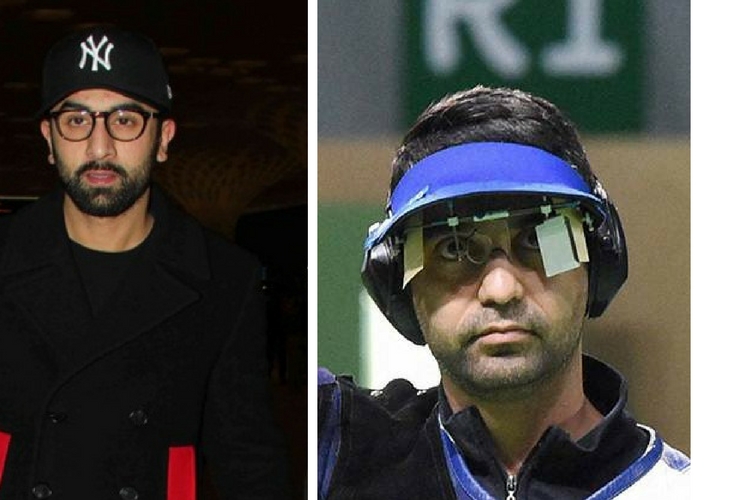 Ranbir Kapoor seems to be the perfect choice to essay the role of Olympic medallist Abhinav Bindra.