It seems Wikipedia has goofed-up again! It seems to have a norm with them. Remember, when Ravindra Jadeja became ‘Sir’. India eves beat their Australian counterparts by 36 runs at Derby to set up a date with England on 23rd of July. It is the second time the Women’s team has made it to the finals, the last time being way back in 2005. They played South Africa in the finals where they emerged second best.

It was an interesting match up against defending champions Australia. Mind you, Australia had thrashed India in the league stage of the tournament by 9 wickets. Then for Mithali Raj-led team India to bounce back in the manner they did to tame Australia is highly appreciable. India batted first and were set back, when they lost both their openers.

That is when Mithali Raj and Harmanpreet Kaur took the onus on themselves and stitched a partnership in excess of 100 to steady the Indian innings. Harmanpreet Kaur then cut lose once Mithali was dismissed. She got able company from Deepti Sharma. The duo put on a breezy 100 run partnership to bolster India’s innings. It was a rain-truncated match of 42 overs. At a certain stage it seemed that India would at best manage to cobble up 220, but Harmanpreet was not settling for that. She reached her 100 and then she was in a zone where she was not missing anything. Her innings of 171* off 115 balls, which comprised of 7 sixes and 20 fours, meant India reach a competitive 281.

Australia lost the match, thanks to some really good bowling by the Indian pacers, along with Deepti Sharma, who managed to strangle the Aussies. India finally emerged victorious by 36 runs. India will now take on England in the finals at Lords.

But Wikipedia committed a mistake by declaring India winners two days ahead of the clash, here is proof: 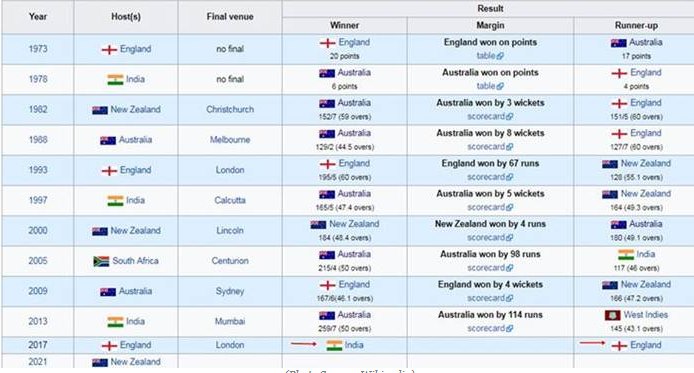 Well, Wikipedia spotting the goof-up has removed the name of the winner. All we can say is, better late than never!