Former Indian opener, Virender Sehwag is known for his witty tweets and hilarious birthday wishes to his mates form the world of cricket. His followers on social media probably have expected him to come up with a commendable tweet for Indian skipper Virat Kohli who turned 29 on November 4. But there was no post on Viru Paji’s Twitter timeline for one of his junior cricketers who is now leading the nation across all three formats of cricket.

Had Sehwag forgotten Kohli’s birthday by any chance? Practically, it’s hard to believe because the man who is so prevalent on social media, how could he miss the topmost trend of the day? On November 5th, #HappyBirthdayVirat was the top trend on Twitter and if we have a look on Viru Paji’s timeline, he posted nothing on that particular day.

Moreover, he wished Gurupurab to his followers a day before Virat’s birthday and also replied to New Zealand’s Ross Taylor on his ‘Darji‘ tweet a day after. Even before that, he had wished Shah Rukh Khan, wrestler Yogeshwar Dutt, former Indian batsman VVS Laxman but not a single tweet for Virat Kohli on his birthday. Isn’t it strange? 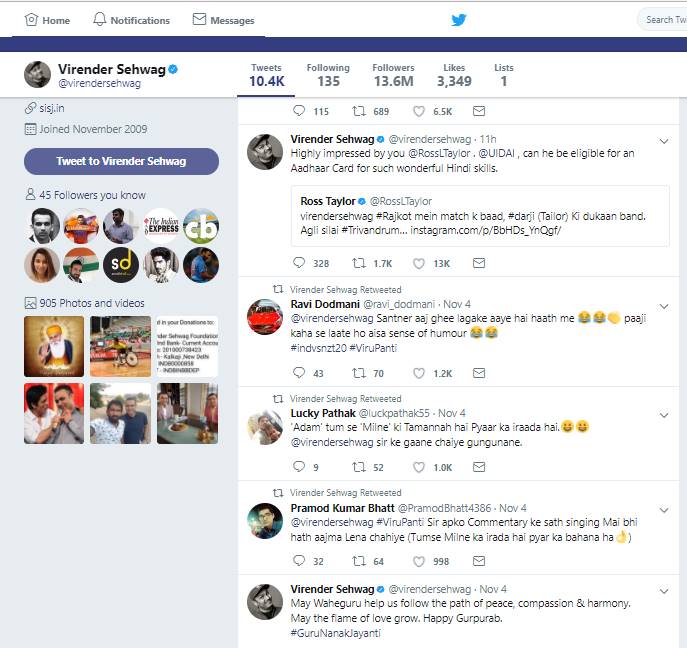 Another probable reason why Viru Paji didn’t wish captain Kohli could be the Indian head coach saga which happened a few months back and he seemed disappointed.

We all remember that the former Indian opener applied for the post of Team India’s head coach. Days after the BCCI finalised Ravi Shastri’s name, Sehwag blamed Kohli and Shastri for ditching him. While speaking on a news channel, Sehwag was heard saying,”

“I thought since they [BCCI top-brass] are requesting me, I should help them. I never thought of applying on my own nor I will ever apply in future. I also had a word with Virat Kohli, he asked me to go for it. It was only then that I applied. If you ask for my opinion, I would say that I was never interested.”

He also spoke about what chat he had with Ravi Shastri. He said,

“When I was in England during the Champions Trophy [2017], I had asked Ravi Shastri that why he hasn’t applied for the post? Shastri then told me that he will not repeat the mistake which he had already made once.”

“If Ravi Shastri had applied earlier, then I don’t think there would have been any chance of me applying for the post. I would have never applied,” Viru Paji added.

Well, the actual reason is still unclear and we don’t think either of the two (Sehwag and Kohli) would ever talk about this topic.

Apart from Virender Sehwag, former Indian head coach Anil Kumble also had no message for the Indian captain. But above all, the Indian captain had enjoyed his 29th birthday with his team India mates and the entire world witnessed those pictures on social media. Here we leave you with some of those snaps: